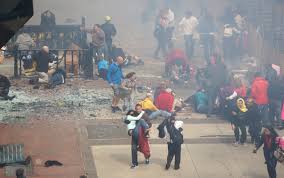 “The only feeling that anyone can have about an event he does not experience is the feeling aroused by his mental image of that event … For it is clear enough that under certain conditions men respond as powerfully to fictions as they do to realities.” Walter Lippmann, Public Opinion, 1922.

The careful coordination of information and visual representations governs the mass mind. The conditions for such are accentuated in times of perceived crisis. For a relatively brief period following the Boston Marathon bombing two sets of photographs emerged that actually depicted what appeared to have taken place at “ground zero,” where the first explosive device detonated. Each series of photos strongly suggests the execution of a mass casualty exercise.

The first set of photographs was taken by amateur sports photographer Benjamin Thorndike, whose employment as a financial advisor at FOC Partners on Boylston provided him with an ideal position. The second set was taken by graphic designer Aaron Tang, whose office is several doors down Boylston Street from FOC. In fact, Tang’s photos are especially revealing as they chronicle the unusual law enforcement and first responder reactions to the incident.

While Tang’s photos and personage are almost entirely absent from corporate news reportage and commentary, Thorndike and a handful of his more than two dozen photos receive sporadic consideration in the short-lived news cycle preceding 5:00PM on April 18, when the FBI revealed images of Tamarlan and Dzhokhar Tsarnaev in the vicinity of the finish line.

The federal government and its major media appendages would then employ this dubious evidence vis-á-vis the Tsarnaevs’ non-American otherness to essentially indict the brothers in the court of public opinion. The spectre of Muslim terrorism–an important propaganda element of the “war on terror”–further legitimated the declaration of martial law in the greater Boston area, culminating in the extrajudicial killing of Tamarlan and the near-murder (so far as the public is lead to believe) of Dzhokhar.

The Boston bombing’s “forgotten” photographs are worthy of further consideration as they suggest the ways in which major news media operate in a de facto censorial fashion with the federal government to highlight certain phenomena while simultaneously rendering important artifacts down the memory hole. The images’ misuse or sheer absence arguably contributed to a major tragedy and miscarriage of justice.

Thorndike’s credentials alongside his bird’s eye perspective of America’s most horrendous terrorist attack since September 11 are of tremendous significance. With this in mind one would think major media would have been clamoring to disseminate his eyewitness account and series of photographs worldwide. Indeed, following the event Mr. Thorndike made himself readily available to the media for interviews.

Although the Associated Press circulated a select few of Thorndike’s photos, LexisNexis and Start Page web searches for “Ben Thorndike” and “Boston Marathon bombing” between the dates April 15, 2013 to May 15, 2013 reveal photo credits in only three US print publications within two weeks of the incident–the New York Daily News (April 17) the Boston Globe (April 18) and the New York Times (April 27)[1] each of which used the photo below; one European paper, the Scottish Express, also used the photos in two pieces.[2] The Globe was the sole outlet to publish remarks from Thorndike extending beyond a soundbite.[3]

As for broadcast outlets, the same search for transcripts reveals only four stories referencing Thorndike, none of which extend beyond a reference or brief interview excerpt. CNN published seven of Thorndike’s photos on its website, yet referenced them only once in subsequent broadcasts.[4]

Mr. Thorndike asserts that he was at his office building on Boylston almost directly above where the first explosion erupted on April 15, 2013. “Almost momentarily when I got there, directly in front of me, right in my sight-line, the explosion went off,” he said. “Just out of reflex, I had the camera on, had it in sports mode, which means I can shoot rapid-fire.” As CBS Boston reported,

“Thorndike shot a sequence of 25 photos right after the blast that shows injured and stunned victims on the ground below. But it was the behavior of one man — seen running from the scene — that prompted Thorndike to contact the FBI.”

“His reflex is to sprint away that really caught my eye [sic]” Thorndike recalls. “Everyone else in the photo is stunned, shocked and frozen,” he said. “It’s either someone who is badly burned, panicked and running, or they’re running for another reason.”[5]

The important fact overlooked, however, that the observed man is running with all limbs intact from the epicenter of a harrowing blast and its purportedly lethal wave of shrapnel.

Thorndike turned the photos over to FBI investigators, who repeatedly interviewed him concerning what he observed. The FBI was tight-lipped concerning the investigation, and what some media termed the “running away man” depicted in the photographs who remains unidentified.

Thorndike’s photographs of what transpired at “ground zero” of the Boston Marathon bombing event contrast sharply with the widely-circulated video footage from the Boston Globe, where the videographer appears to purposely arch the camera away from alleged bombing victims and activity on the sidewalk.

Although more than 260 individuals supposedly suffered injuries as a result of the bombings,[6] the high resolution photographs of both Thorndike and Tang indicate no more than three-to-four dozen persons in the immediate vicinity of the initial explosion, most of whom remain mobile in the immediate aftermath and are soon eclipsed in number by law enforcement and medical responders.

According to the CBS Boston report, “Thorndike and his co-workers fled soon after the photos were taken.” This is perhaps an unusual observation since journalists given that within seconds of the detonations the Boston Police locked down surrounding buildings in order to strictly control media access to the unfolding event. [See, for example, video here at 0:07-2:24].[7] CBS also curiously reports, “All the other bay windows in the office were blown out except the one where Thorndike stood.”[8]

[Image removed on 9/11/14 at the express written request of the photographer.]

In terms of broadcast, with the exception of the more detailed interview highlighted above by CBS Boston, the novice photographer is given a soundbite on ABC and NBC newscasts, as the photos are presented and lightly touched upon.[9] For example, like Thorndike, NBC’s Pete Williams similarly references the man emerging from the center of the initial blast. “[Y]ou can see the impact of the blast has partially ripped his clothes away,” Williams remarks.[10]

Thorndike’s photos are also brought up twice on one specific CNN program by the cable channel’s “law enforcement analyst” Mike Brooks, who explains how the visual evidence from a typical crime investigation is handled. “What [federal law enforcement] have done,” Brooks remarks, is that

they will take this picture, any video that is along that route, and they will try to put together a timeline. Going back before, during and after and what they’ll do is they’ll take this video, and they will send it to Quantico. The FBI lab at Quantico has an engineering section. I have used them on a number of my cases to help enhance video and the technology has increased so much, you know, over the years–“[11]

What the FBI in fact proceeded to do with the assistance of major media was almost the exact opposite–focusing on the Tsarnaevs to the exclusion of all other agents and phenomena–and foregrounding these images alongside those of purported evidence and the injured to forthrightly incriminate the Tsarnaevs. The overall effect of this gross manipulation was evident in the jubilation exhibited by Boston residents upon Tamarlan’s murder and Dzhokhar’s capture; mass ecstasy eerily akin to the effect of a public lynching.

Events such as momentous political assassinations, the Tonkin Gulf, Oklahoma City, and 9/11 have suggested that government-corporate manipulation of the public for broader political ends is not difficult to achieve. Control over an event and the select use of stimuli elicits certain desired responses. This is particularly the case in a society that exercises almost unquestioning allegiance toward what Erich Fromm termed “anonymous authority.” The Boston Marathon bombing event suggests the end result of this blind faith; how such finely tuned stagecraft can mobilize a mass mentality to the degree that it misinterprets the implementation of martial law as a genuine representation of a public will.