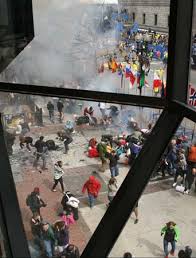 (Several additional photos of the finish line bombing aftermath have been added to the latter portion of the essay.-JT, 4/27/13)

“For the most part we do not first see, and then define,” Walter Lippmann observed in 1921, “we define first and then see. In the great blooming, buzzing confusion of the outer world we pick out what our culture has already defined for us, and we tend to perceive that which we have picked out in the form stereotyped for us by our culture.”[1]

Along these lines, a veteran hypnotherapist and mind control expert interviewed in 2001 by investigative journalist Jon Rappoport observes,

The media gives you the illusion that you are seeing something. That’s the billion‐dollar key to mind control … 90% of all the mind control in the world is done by the media, and it is all based on the viewer or the reader never seeing anything really beyond the surface of what is presented.”[2]

What exactly took place on April 15 at the Boston Marathon is unclear, yet what is now evident is a stark divergence between the narrative description of excessive carnage meted out as a result of the explosive devices and at least a portion of the video and photographic documentation of the bombing itself.

The corporate media proceeded in lockstep with dutifully propagating the authorized narrative of a combat-like environment at the marathon finish line. “Boston Police Commissioner Ed Davis said Monday night that the death toll had risen to three,” CNN told its viewers.

Scores were injured at the scene. One of the dead was an 8-year-old boy, according to a state law enforcement source. Hospitals reported at least 144 people are being treated, with at least 17 of them in critical condition and 25 in serious condition. At least eight of the patients are children. At least 10 people injured had limbs amputated, according to a terrorism expert briefed on the investigation. Several of the patients treated at Massachusetts General Hospital suffered injuries to lower limbs that will require “serial operations” in the coming days, trauma surgeon Peter Fagenholz said Monday night. Some injuries were so severe amputations were necessary, Fagenholz added.[3]

Much like the 24-hour cable news coverage, more prestigious venues such as the New York Times provided a graphic account alongside disturbing images of the aftermath, under the April 16 headline, “BLASTS AT BOSTON MARATHON KILL 3 AND INJURE 100.”

“These runners just finished and they don’t have legs now,” said Roupen Bastajian, 35, a Rhode Island state trooper and former Marine. “So many of them. there are so many people without legs. It’s all blood. There’s blood everywhere. You got bones, fragments. It’s disgusting … We put tournquets on,” Mr. Bastajian said. “I tied at least five, six legs with tourniquets.”[4]

Testimony in the newspaper of record from another eyewitness relates similarly gory details.

Deidre Hatfield, 27, was steps away from the finish line when she heard a blast. She saw bodies flying out into the street. She saw a couple of children who appeared lifeless. She saw people without legs. “When the bodies landed around me I thought: Am I burning? Maybe I’m burning and I don’t feel it,” Ms. Hatfield said … She looked inside a Starbucks to her left, where she thought a blast might have occurred. “What was so eerie, you looked in you knew there had to be 100 people in there, but there was no sign of movement.”[5]

The country’s commander-in-chief then publicly confirmed how the federal government would avenge the violence and bloodshed.

President Obama, speaking at the White House, vowed to bring those responsible for the blast to justice. “We will get to the bottom of this,” the president said. “We will find who did this, and we will find out why they did this. Any responsible individuals, any responsible groups will feel the full weight of justice.”[6]

Does a compelling description of a terrorist attack replete with “eyewitness accounts” of the terrifying scene and official pronouncements constitute an actual event? The available video evidence reveals an explosion occurring at 2:50PM across Boylston Street from the finish line bleachers, the exact point where the national media’s camera lenses were transfixed. The abundant media presence alongside personal cellphone cameras have provided abundant footage of the event and its immediate aftermath.

As with previous terrorist bombings, one must ask whether the ordnance described by police is in fact capable of wreaking the havoc that it purportedly caused. In 9/11 and Oklahoma City, for example, subsequent investigation indicated that jet engine fuel and a sizable ANFO bomb by themselves could not have caused the structural damage to the World Trade Center Towers and Murrah Federal Building respectively.

Available video of the first bomb detonating at the Marathon finish line suggests a direct upward discharge rather than the horizontal dispersion that would have wreaked the havoc to lower limbs so widely reported in physicians’ statements.

Moreover, the fact that whole pieces of the pressure cookers were produced by police further points to a more channeled dispersal of the bombs’ force–indeed, one that may not have involved a broad lateral distribution of shrapnel.[7]

Along these lines, despite the seemingly formidable explosions very few bodies and no severed limbs are observable on the ground, even though there are indeed several people exhibiting bewilderment and apparent injuries.

In short, the event closely resembles a mass-casualty drill, which for training purposes are designed to be as lifelike as possible. Since it is mediated, however, and primarily experienced from afar through the careful assemblage of words, images, and the official pronouncements and commentary of celebrity journalists, it has the semblance of being for all practical purposes “real.”

Below is footage of a “mass casualty exercise” conducted at the Community College of Aurora in Colorado that includes explanation and commentary from emergency drill and response experts coordinating the event.

Here is another video of a similar drill shot at Bagram military base in Afghanistan produced by US Army personnel .

Reports arising in the Boston bombing’s aftermath suggest how local authorities in possible coordination with the Department of Homeland Security were in the process of carrying out such drills, complete with the announcement of bombs being detonated and bomb-sniffing dogs present at the start and finish lines.

For example, University of Mobile’s Cross Country Coach, found it unusual how there were bomb sniffing dogs at the event’s start and finish lines. “They kept making announcements to the participants do not worry, it’s just a training exercise,” Stevenson remarked.[8]

Alternative news media have also pointed to the presence of what appear to be private military contractors in matching civilian apparel operating in coordination with an unmarked SUV close to the Marathon finish line. Identically-dressed men are observable before the bomb blasts in the immediate proximity of where the first bomb exploded and across the street thereafter.[9]

With the above in mind, photographic evidence of the event suggests the possibility of play actors getting into position after the detonation of what may in fact have been a smoke bomb or similarly benign explosive. The photo album from which the following photos are taken is available here. Additional photos may be found at cryptome.org.

Viewing at the immediate bomb blast from the following angle, one can see a dearth of people where the explosive is set off, suggesting how the immediate area may have been cleared before detonation.

Further, there is whispy smoke with no sign of any shrapnel piercing the smoke, the race sideline fabric, or anything outside of the sidewalk perimeter.

If this is the case the highly-circulated photo showing an orange-hued “fireball” explosion may have been embellished.

‘The first two photos taken from a surveillance camera and published on cryptome.org show the fist moments following the initial blast at the finish line.

[Two photo images removed on 9/20/14 at the request of photographer Ben Thorndike.]
The photo below shows what appears to be either a man with his legs blown off or an amputee with his stump curled around the head of a woman. A man in a “hoodie” jacket is also sitting upright behind the woman. The injured man or amputee, later identified in major media outlets as Jeff Bauman Jr.[10] who also participated in helping the FBI identify the alleged bombers,[11] appears preoccupied with something in his hands that are close to his face. This is unusual behavior for a man who has just sustained a severely traumatic and mortal injury.

The fourth and fifth photos show the man wearing the hoodie garment apparently helping the injured man/amputee with his right leg. Could he be removing this man’s prosthetic?

In the above photos and succession below, the black woman appears to be looking at and signalling with her left hand to someone off-camera. Momentarily this woman will be wholly unconscious and transported out on a gurney. In the subsequent photos Bauman joins the woman, making an identical gesture with his right hand in unison. The next two photos are especially unusual given the apparent sequence of events: the amputee is lying on the ground still unattended after the less-severely wounded black woman is taken away by emergency response workers on a gurney. Others, such as the man sporting the hoodie, having likewise sustained far less serious injuries, appear to be among the first to be carted away to receive medical attention.

The use of a wheelchair to aid and transport an individual with such severe injuries–who amazingly is still conscious and discharging little-if-any blood–runs counter to common emergency medical procedure.

Much is still unknown about the tragic bombing to draw any concrete conclusions. However, much like 9/11, Oklahoma City, Aurora, and Newtown, an official storyline complete with the execution and/or capture of bad-guy culprits has been forged and vigorously drummed into the public mind.

In the law enforcement panic that followed martial law was declared and militarized police were unleashed in a paradoxical attempt to reestablish the order that was disrupted through their own incompetence or coordinated intent, another startling flash of the police state’s sharp fangs.

The upshot will be a continued program of more intensified repression at taxpayer expense alongside a corresponding erosion of civil liberties. All the while, future terror-inducing events magnified through the corporate news media’s falsifying prism reinforce our cursed tendency to welcome the illusion—to define first, and then see.

Republished at GlobalResearch.ca on April 22, 2013.

Bloomberg News Loses It When Professor Tells the Truth (Video)

Bloomberg News Loses It When Professor Tells the Truth (Video)