Our April 9 report of Broward Sheriff’s Deputy Jason Fitzsimons’ April 1, 2018 passing generated considerable online interest. This followup is intended to clarify the initial story based on observations of Fitzsimons’ social media activity and what we now recognize as the deputy’s dual Facebook pages that contain differing information.

First and foremost, Deputy Fitzsimons’ Facebook account was not “scrubbed,” as previously reported. Rather, Fitzsimons had no less than three Facebook pages–one of which was initiated in January 2016.

Further, a second Facebook page overlooked in our initial report in fact contains Fitzsimons’ politically-oriented posts that tend to make his untimely passing suspect, and as of this writing these political posts or images can still be viewed on the page in question.

END_OF_DOCUMENT_TOKEN_TO_BE_REPLACED

Tony Mead is an intrepid Sandy Hook researcher with a Facebook page called “Sandy Hook Hoax“. Two days ago, on April 8, 2018, Facebook took down his page. In its place, is this message:

The only reason Facebook gave Mead for unilaterally and without warning taking down his “Sandy Hook Hoax” page is the vague catch-all “Something you posted doesn’t follow our Community Standards”:

END_OF_DOCUMENT_TOKEN_TO_BE_REPLACED

Over the past several weeks Ericson Harrell of the North Miami Police Department has taken to Facebook to share ideas and insights with like-minded critical thinkers on complex issues and events. He’s been asking important questions about the Parkland massacre that are making corporate media heavily invested in the narrative increasingly uncomfortable. As a result several regional news outlets have lashed out at the skeptic, prompting his employer to open an internal investigation of Harrell’s potential “thought crimes.”

The day after the Valentine’s Day shooting, for example, the North Miami police officer pondered in one post,

“What if the cops went into school and shot and kill[ed] some students?! Would they be forthcoming? Lawsuits would help to find out.”

Elsewhere Harrell observes the more-than-subtle psychological warfare being waged on the public through the prevalent use of terms like “active shooter,” to gear individuals toward anticipating an increasingly militarized society.

END_OF_DOCUMENT_TOKEN_TO_BE_REPLACED

Sometime on or around April 1, 2018 Broward County Sheriff’s Deputy Jason Fitzsimon, 42 years old and in excellent state of mind and health, called in sick to his job. Shortly thereafter Fitzsimons was found dead on his sofa. There has been a complete “news blackout” of this curious and untimely death.

Deputy Fitzsimons wasn’t just any law enforcement officer. Unlike many of his peers, he took to social media to question the potential agenda behind the February 14 Marjory Stoneman High School mass shooting, suggesting that the event was being used to promote the Democratic Party’s gun control platform in anticipation of the 2018 midterm elections. And recent personnel decisions involving public officials indicate (e.g. here and here), an unwritten law of taxpayer-funded institutions is that employees disavow and steer clear of “conspiracy theories” that may call their superiors motives into question.

One post found on Fitzsimon’s Facebook page depicts the Parkland massacre’s main spokesperson, David Hogg, in National Socialist regalia, with the caption, “We will March Until We Disarm Every American.”

Fitzsimons Facebook page has since been “scrubbed” of any 2018 posts, which would of course include those that may be calling the the Parkland shooting or its aftermath into question.

END_OF_DOCUMENT_TOKEN_TO_BE_REPLACED 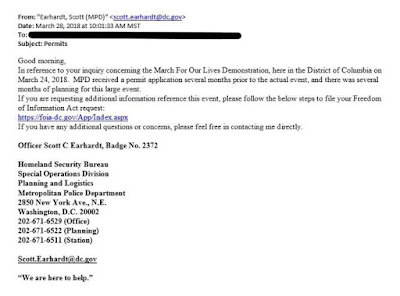 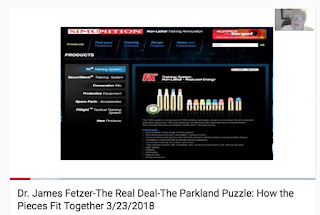 END_OF_DOCUMENT_TOKEN_TO_BE_REPLACED

Update: Some readers have questioned the authenticity of the email document from Officer Earhardt, furnished earlier this week by Ole Dammegard. Mr. Dammegard has since provided the full document including the heading, but with the identity of the recipient withheld to preserve their anonymity. The document is reproduced below. It should also be noted that given DC’s federal/municipal makeup, two permits were applied for and granted.

A source of European researcher Ole Dammegard contacted the Metropolitan D.C. Police Department concerning the permit for the March For Our Lives demonstration in Washington, D.C.
Dammegard’s source received the email below from Officer Scott C. Earhardt of the Homeland Security Bureau of the Metropolitan Police Department and forwarded it to him.

This email suggests that the “March For Our Lives,”  enthusiastically promoted as a spontaneous event organized by Parkland student activists and held in the the nation’s capitol on March 24, 2018 to pressure political leaders on gun control, was in fact planned “several months prior to the actual event.” These are the words of Officer Scott Earhardt of the Special Operations Division of the DC Police.

Days ago several alternative news outlets questioned seeming contradictions in Parkland gun control student activist David Hogg’s recollection of the February 14, 2018 events-specifically whether Hogg was on school grounds during the shooting or lounging at his residence.