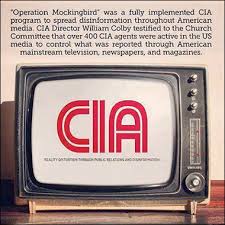 Alongside Dispatch 1035-960, issued in early 1967, the communiqué below similarly encourages “[c]overt assets” to use their positions within the mass media to remind the American public, where “the depth of impact warrants such action”, that “Communists and other extremists always attempt to prove a political conspiracy behind violence.” The September 22, 1964 memorandum suggests the extent to which the Central Intelligence Agency was a principal actor in the psychological warfare effort unleashed on the American people propagating the Warren Report and its “magic bullet” or “lone assassin” conspiracy theory of President Kennedy’s murder.-JFT

1. The long awaited Warren Commission Report, on its exhaustive investigation into the assassination of President Kennedy on November 22, 1963 and the subsequent murder of Lee Oswald by Jack Ruby, will be released sometime over the weekend. The Department of State is air pouching copies of the Report (based on some 20 volumes of hearings) to posts for selective presentation (upon formal release) to “editors, jurists, Government officials, other opinion leaders” after the formal release. (See attachment, State Circular 505, 19 September 1964, joint State-USIA message, with list of recipients). Copies of this Government Printing Office edition will be sent to field stations from headquarters.

2. Reports from around the world indicate that there is a strong belief in many countries that the assassination of the President was the result of a “political plot”; the unanswered interpretation that Ruby’s murder of Oswald was committed to prevent Oswald from revealing the purported conspiracy adds to this belief. Communist regimes have used both murders to denigrate American society and the release of the Report will undoubtedly be used as a new peg or the same purpose.

3. Covert assets should explain the tragedy wherever it is genuinely misunderstood and counter all efforts to misconstrue it intentionally – provided the depth of impact warrants such action. Communists and other extremists always attempt to prove a political conspiracy behind violence. In countries accustomed to assassination by political conspiracy, American dedication to institutions of law and government with stable administrative procedures can be described; and American Presidents can be shown to have been the victims (with the exception of Lincoln) of single, fanatical individuals.

4. Three commercial editions will be published as soon as possible after the formal release. KUWOLF/PROP has ordered 150 of Bantam’s publication but will evaluate the introductions of all three and inform operating Divisions of any drawbacks. Divisions should make bulk purchases for field use through regular channels.