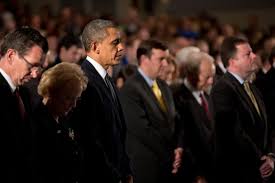 The Obama Administration is giving Newtown another $7.1 million in federal funds for those allegedly impacted by the December 2012 mass shooting at Sandy Hook Elementary School. The grant comes from the U.S. Department of Justice Office for Victims of Crime, and will pay for long-term mental health counseling for families, law enforcement and first responders. Officials say some of the money will be set aside for school safety measures.

The funds are being sent to the Connecticut Office of Victim Services, which is part of Connecticut’s Judicial branch. From there the money will be distributed to the town of Newtown and other organizations designated to serve the community, including Newtown Youth and Family Services, St. Rose of Lima Church, the Newtown Resiliency Center, Wellmore and the United Way of Western Connecticut.

“This grant will provide much-needed relief and support for Newtown to help this brave community heal,” says Elizabeth Esty, US Representative for the 5th District of Connecticut that includes Newtown. Esty announced the news on the morning of June 17, 2014.[1]

In August 2013 the Obama Department of Justice doled out $2.5 million to law enforcement and first responder agencies involved in the December 14, 2012 Sandy Hook Elementary School massacre. In May 2013 and January 2014 the US Department of Education directed a total $3.2 million to Newtown. Also in 2013, Newtown received a $1.5 million grant from the DOJ’s Office for Victims of Crime. Overall the federal government has now funneled a total $14.3 million to the Newtown region since the Sandy Hook event.

In October Governor Dannell Malloy designated $50 million for Newtown to build a new school in place of the Sandy Hook facility. Shortly thereafter the Sandy Hook school was slated for demolition.[3]

Over the past 18 months Newtown Youth and Family Services increased its staffing capacity and has seen the client population quadruple, NYFS Executive Director Candice Bohr says in a press release. She asserts the agency will likely see a continued need in mental health-related services and funding.

Richard Blumenthal, Democrat US Senator from Connecticut, says he will also continue to work with advocates and families of Sandy Hook Elementary School to change the nation’s “deeply flawed gun laws.”

“For those who lost loved ones, and for the students, educators and first responders who witnessed the unimaginable horror at Sandy Hook Elementary School, recovery may require continued services,” he declares in the release. “I will continue to advocate for the Newtown community to aid its full recovery.”[4]

Newtown Youth and Family Services has seen a rise in demand for mental health counseling in the aftermath of the shootings, said Executive Director Candice Bohr. “Since the tragedy, NYFS has increased its staffing capacity and has witness the client population quadruple in the last 18 months,” Bohr notes. “We anticipate seeing a continued need in services and funding related to mental health, and we are committed to providing the continued support the town, the school district, and the families of the community need.”[6]

The significant amount of funding being designated Newtown is unusual, especially give that the massacre event continues to defy adequate explanation by local, state and federal law enforcement agencies that together responded to the event. In November 203, the FBI released a heavily redacted report of the event to the Hartford Courant.[8]

As MHB reported in 2013, less than three weeks before the Sandy Hook massacre, on November 27, 2012, Attorney General Eric Holder appeared at a news conference in New Haven alongside Connecticut Governor Dan Malloy to announce Project Longevity, a joint venture by the Justice Department and State of Connecticut. The endeavor was described by one law enforcement officials as “a statewide approach that targets repeat criminals, creates alternatives for potential gang members and rallies neighborhoods against violence.”

On December 20 of that year Holder made an unannounced visit to Newtown to meet with state and local law enforcement and emergency responders shortly after a meeting in Washington with Vice President Joe Biden, presumably to discuss forthcoming attempts at gun control legislation.[9]