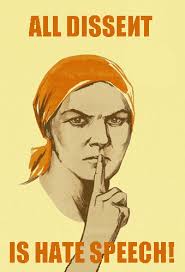 On June 3, 2014, at the ostensible recommendation of the Southern Poverty Law Center [1] the U.S. Department of Justice announced it will revive the Domestic Terrorism Executive Committee (DTEC), founded after the 1995 Oklahoma City Murrah Federal Building bombing.

“We must concern ourselves wth the continued danger we face from individuals within our own borders who may be motivated by a variety of other causes from anti-government animus to racial prejudice,” Attorney General Eric Holder remarked.[2]

Days after the SPLC’s calls for the reconstitution of the DTEC, something uncanny takes place: militant anti-government conspiracy theorists shoot two cops in a pizzeria and barricade themselves in a nearby Wal Mart. SPLC spokespersons then took to the media with a sort of “I told you so” bravado.

The overt politicization of the event, largely framed in dubious SPLC “research” on “hate groups,” proceeds in now-predictable fashion. Jerad Miller “was clearly part of the Patriot movement,” the Southern Poverty Law Center’s Mark Potok explains on Democracy Now!

The one thing he really talked about a lot was guns. And that of course is central concern for the Patriot movement. At one point, he talked about, if you even disagree that the Second Amendment should be interpreted in such a way in a very liberal way in terms of an ownership, that you should be hung from a lamppost if you don’t leave the country. So that seemed to be really the central idea.[3]

This movement’s rhetoric is so extreme in terms of hatred of police, federal officials, the entire government apparatus, the Obama administration, etc., that it’s not surprising to see somebody like that—like Miller—making these basic threats toward law enforcement. This is where this rhetoric leads—to hatred of all those kinds of officials and often violence [sic].” [4]

Such talking points have likewise reverberated throughout corporate-owned media. Raw Story called the assailants “right wing conspiracy nuts with a deathwish.” The Daily Beast asserted that the culprits’ “radicalism was cultivated in online conversations about conspiracy theories ranging from ChemTrails to fluoride in the water supply.” CNN referenced a study by The New America Foundation to argue that “right wing views” are more dangerous than Al Qaeda, while MSNBC host Alex Carey hosts expressed outrage over “anti-government fear-mongering on the fringe” and “the zealotry of the far-far right.”[5]

The US government, major media, and propaganda organs like the SPLC operate with the smug assuredness that an overwhelming majority of the public will accept the veracity of public events provided, 1) the information is relayed by official figures in measured tones and appropriate attire, 2) such information is presented with pleasing and predictable visual cues, and 3) the information is accompanied by editorial inference as to how exactly one is to interpret it.

The official story concerning 1995 Oklahoma City Murrah Federal Building bombing that most people will recite as catechism is that Timothy McVeigh had become increasingly “radicalized” with anti-government views. Such perspectives led him to plot with a small group of conspirators to bomb the Murrah building.

This is the “official story” established largely as a result of SPLC propaganda relentlessly parroted by major news media in the aftermath of that tragic event. “Once the Justice Department announced the capture of McVeigh and [Terry] Nichols” shortly after the bombing, author David Hoffman observes,

the mainstream media, with information manly supplied by the Anti-Defamation League of the B’nai B’rith, and the Southern Poverty Law center, focused their anti-militia spotlights. Attacks on the Patriot/Militia movement continued for months, even without documentable proof of the suspects’ connections to the militias, or the militias’ connection to the bombing.[6]

The fear and paranoia surrounding the specter of “homegrown terrorism” continued until September 11, 2001, when the military-industrial-intelligence complex modified its terror card to focus public attention on swarthy, gun-toting Muslims.

To this day such propaganda obscuring the real story on Oklahoma City has gone almost consistently unchallenged by journalists and academics alike. The facts are often stranger than fiction, yet the absence of an accurate recounting outside of a handful of important efforts perpetuates control over the public mind and its collective memory. Moreover, the failure to come to terms with history begets continued disinformation, historical contrivance, and the aggressively expanding police state they serve.

This acute politicization of an event will also likely be the case with the Las Vegas shooting, where the public knows little more than what it has been told by major media. That message and recollection is no doubt being crucially shaped by SPLC propaganda.

As with most every mass shooting event—Aurora, Sandy Hook, and the violent and bizarre spate of occurrences throughout early June 2014—the only way the media and public develop an understanding of what has taken place in each instance is through press releases and conferences by local law enforcement, often under the aegis of federal officials.

On June 10 this author contacted the Las Vegas Metropolitan Police Department and asked if a copy of the incident report will be made available to the press and public. Yet, as with the May 23 Isla Vista shooting, he was told that no such document would be released.

At home and abroad, history is allowed to repeat itself to the detriment of the overwhelming majority when government is not held to account for its polices and actions. This situation is set in stone when special interests are allowed to politicize such events and accordingly mold public sentiment to their narrow agenda. If there is no verifiable record of what has taken place in this and similar events, then public opinion and the history upon which it is based are the stuff of soundbites and press conferences; indeed, overall manipulable elements of political elites and the propaganda techniques they wield.