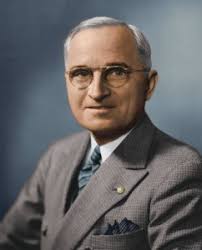 INDEPENDENCE, MO., Dec. 21 — I think it has become necessary to take another look at the purpose and operations of our Central Intelligence Agency—CIA. At least, I would like to submit here the original reason why I thought it necessary to organize this Agency during my Administration, what I expected it to do and how it was to operate as an arm of the President.

I think it is fairly obvious that by and large a President’s performance in office is as effective as the information he has and the information he gets. That is to say, that assuming the President himself possesses a knowledge of our history, a sensitive understanding of our institutions, and an insight into the needs and aspirations of the people, he needs to have available to him the most accurate and up-to-the-minute information on what is going on everywhere in the world, and particularly of the trends and developments in all the danger spots in the contest between East and West. This is an immense task and requires a special kind of an intelligence facility.

Of course, every President has available to him all the information gathered by the many intelligence agencies already in existence. The Departments of State, Defense, Commerce, Interior and others are constantly engaged in extensive information gathering and have done excellent work.

But their collective information reached the President all too frequently in conflicting conclusions. At times, the intelligence reports tended to be slanted to conform to established positions of a given department. This becomes confusing and what’s worse, such intelligence is of little use to a President in reaching the right decisions.

Therefore, I decided to set up a special organization charged with the collection of all intelligence reports from every available source, and to have those reports reach me as President without department “treatment” or interpretations.

I wanted and needed the information in its “natural raw” state and in as comprehensive a volume as it was practical for me to make full use of it. But the most important thing about this move was to guard against the chance of intelligence being used to influence or to lead the President into unwise decisions—and I thought it was necessary that the President do his own thinking and evaluating.

Since the responsibility for decision making was his—then he had to be sure that no information is kept from him for whatever reason at the discretion of any one department or agency, or that unpleasant facts be kept from him. There are always those who would want to shield a President from bad news or misjudgments to spare him from being “upset.”

For some time I have been disturbed by the way CIA has been diverted from its original assignment. It has become an operational and at times a policy-making arm of the Government. This has led to trouble and may have compounded our difficulties in several explosive areas.

I never had any thought that when I set up the CIA that it would be injected into peacetime cloak and dagger operations. Some of the complications and embarrassment I think we have experienced are in part attributable to the fact that this quiet intelligence arm of the President has been so removed from its intended role that it is being interpreted as a symbol of sinister and mysterious foreign intrigue—and a subject for cold war enemy propaganda.

With all the nonsense put out by Communist propaganda about “Yankee imperialism,” “exploitive capitalism,” “war-mongering,” “monopolists,” in their name-calling assault on the West, the last thing we needed was for the CIA to be seized upon as something akin to a subverting influence in the affairs of other people.

I well knew the first temporary director of the CIA, Adm. Souers, and the later permanent directors of the CIA, Gen. Hoyt Vandenberg and Allen Dulles. These were men of the highest character, patriotism and integrity—and I assume this is true of all those who continue in charge.

But there are now some searching questions that need to be answered. I, therefore, would like to see the CIA be restored to its original assignment as the intelligence arm of the President, and that whatever else it can properly perform in that special field—and that its operational duties be terminated or properly used elsewhere.

We have grown up as a nation, respected for our free institutions and for our ability to maintain a free and open society. There is something about the way the CIA has been functioning that is casting a shadow over our historic position and I feel that we need to correct it.

16 thoughts on “Limit the Role of CIA to Intelligence”