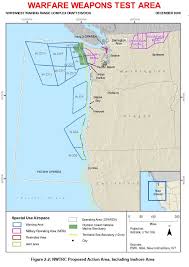 Agricultural science expert and environmental activist Rosalind Peterson explains how the US Navy is intensifying its warfare testing in the Pacific, Atlantic & Gulf of Mexico in 2013 and 2014.

Some environmentalists and alternative media outlets suggest that elevated coastal radiation levels and marine die-offs have resulted due to radiation emanating from the 2011 Fukushima nuclear power disaster. Yet how much of this devastation is attributable to recent widescale military experimentation off of the Pacific and Atlantic Coasts?

Click here to view Peterson’s March 11, 2014 video addressing the escalation of U.S. Navy Warfare Testing and the areas in which the U.S. Navy is currently conducting Live-Fire Warfare Practice.

*** The U.S. Navy Map below outlines the areas in which the U.S. Navy is now conducting warfare testing in the Pacific, Atlantic & Gulf of Mexico.

“THE U.S. NAVY SHOULD BE PROTECTING OUR OCEANS…NOT DESTROYING THEM IN THE NAME OF WARFARE PRACTICE!”

The Navy, in the above video, refused to answer any questions to this group as a whole attending the Navy Open House Meeting.  The Navy would only answer questions individually at their individual Navy stations outside of the group meeting room.  This restricted the ability of everyone attending their meeting to hear the answers to questions posed by the group as a whole.  We allege that the U.S. Navy Open House process violates the National Environmental Quality Act (NEPA).

61 thought on “US Navy’s “Shock and Awe” Environmental Assault”