Tragic publicized events provide the basis for major fundraising efforts with the purported rationale of assisting those immediately impacted. In the case of the Sandy Hook School massacre charities have sprung up to take in tens of millions for wide array of “healing” and preventative initiatives.

This article originally appeared at Insanemedia on March 23, 2014 (link here), and is republished with permission. This is the fourth installment in a series examining the reported donations and government revenue taken in by Newtown/Sandy Hook charities and related entities in the wake of the December 14, 2012 event.-JFT

Now that the dust has settled a bit,  it’s time to take another look at the donation totals for Sandy Hook.  There are several articles that have been published over the past 15 months with varying degrees of relevance.  Some of them gleaned information from CT Attorney General George Jepson’s survey,  but at the time of publication,  not all respondents had filed their reports.  This includes my previous article, Follow the Money Part 3.  At the time of that writing,  it was impossible to arrive at an accurate total of the charities’ collections.

Since that time, there have been Federal grants made to Newtown, and one very large grant from the state of Connecticut, but we’ll get to that shortly.  I would first like to cover the CT Attorney General survey,  although out of date at this point,  it seems a good place to begin.

By clicking through each report,  the totals of money raised by spring of last year can be found.  Of the 62 unique charities reporting, the whole dollar sum of all donations amounts to

As I mentioned, this total is inaccurate.  It is less than what has actually  been raised.  How much less we can estimate based on later reporting.

Also mentioned in the NBC article was the Sandy Hook-Newtown Community Foundation as having raised “over 12 million”.  That is one million+  more than reported originally.  Let’s add again:

Newtown Youth and Family Services originally reported 1 million raised, but by the end of the year they claimed 1.2 million. 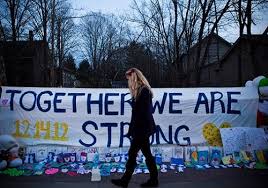 The NBC reporter included a few smaller charities that I did not find listed on the Jepson and Friends survey.  I am attempting to get at the most accurate, conservative total.  The 27 million claimed by NBC may well be close to the truth.

What the article in question did not cover were the Federal and State grants awarded to Newtown in the interim.  Let’s take a look at those, shall we?

From the Department of Justice, Newtown received 2.5 million dollars, for officer overtime and what-not.

The Department of Education provided two School Emergency Response to Violence, or SERV grants of 1.3 million in May of 2013,  and 1.9 million in January of this year.

“We will do whatever we can to continue assisting and supporting the healing and recovery of Newtown,” U.S. Secretary of Education Arne Duncan said. “This additional grant will help students, teachers, families, school district and community move forward after such an unimaginable tragedy.”

The State of Connecticut pledged to award Newtown  an additional 50 million dollars to demolish Sandy Hook School, and build a new and improved one on the very same site.

Newtown will not have to pay a penny for a new Sandy Hook Elementary School — state officials are making sure of that.

In the waning hours of the General Assembly session this week, legislators voted to approve as much as $50 million for a new school in Newtown.

Gov. Dannel P. Malloy, at a Capitol news conference Thursday afternoon, said he had made it clear to Newtown First Selectman Pat Llodra within days after the Dec. 14 shootings at the school that it would be up to the town to decide the future of the building.  (CTpost.com June 6, 2013)

That about does it for Government funding.

Let’s now add in the very generous donation made by General Electric of 15 million dollars.

“More than 150 employees of Fairfield-based GE live in Newtown. GE CEO Jeff Immelt said that over the last year, GE employees who live in Newtown also identified a community center as among the town’s greatest needs.

The town said it will use $10 million to build the center and $5 million for operating costs, including hiring staff, over five years. The center will be owned and operated by the town.”

No conflict of interest there.  I report, you draw outrageous conclusions.

There are dozens more charities to look into.  The smaller, child/victim associated funds that serve as scholarships in the child’s name for example.  The Catherine Hubbard fund raised 250k for an animal sanctuary.  This was included in the Attorney General report.  The Fairfield County Community Foundation collects for Mary Sherlach and Grace McDonnell.  The 62,000 raised by the Ct Yankee council Boy Scout Pack 170 was divvied up between the Hockley, Hubbard, Kowalski, Previdi and Wheeler families, all of which have their own fund raising vehicles.  You may recognize the difficulty in figuring out what went where and when.

Since all 501(c)3 organizations must file a 990 or 990EZ with the IRS, we might reasonably expect to have access to these filings when they are available.

I was able to locate a few funds that openly displayed the total raised on the donation page:  Ben’s Lighthouse: $40,646, and Race 4 Chase (Kowalski)$ 67,807.  Since they both received the gift from the Boy Scouts,  do these totals include the 12,400 that would have been their share?  Only the shadow knows.

I will continue to gather the information on these smaller funds and provide you with my findings.  I had been feeling a little guilty for not following up with another article for so long, but as it happens,  the information available now is more accurate than what it would have been six months ago.  My guilt is assuaged.  Thank you for your continued interest in “Follow the Money”.

Just as an aside,  a few researchers have made arguments regarding the actual population of Newtown being under 2,000 people.  This seems plausible to me only because we have heard so very little from this community of “28,000″ .    I have seen reports from people driving through the area, and they describe it as being very deserted.  While this anecdotal evidence may not be proof of anything, consider the city-data report from 2012 which states that the population of Newtown is:

For what it’s worth.