There is a possibility that Peter and Adam Lanza never existed. There is, for example, limited evidence of their lives before 2009. Do you want to know who does exist ? The author of a 7,600 word article that is supposedly based on several interviews with Peter Lanza.

Andrew Solomon is the son of Howard Solomon, the CEO of pharmaceutical giant Forest Laboratories which had research and development expenditures  of about $1,000,000,000 last year. Forest Laboratories produces Lexapro and Namenda in Ireland while their Headquarters is located in Bermuda. This way they pay $0 in Corporate Tax.

In February 2014, Actavis announced it would acquire Forest Laboratories for around $25 billion. Howard retired in Dec 2013 and stands to make a killing thanks to the announced buyout that will increase his share values incredibly.

Namenda will no longer be available to Alzheimer Patients beginning Aug 15, 2014. It is being taken off the Market and the patients will need to switch to NamendaXR. They are not doing this because of any discovered dangers, not because it has been over-prescribed to mild cases even though it is only recommended for moderate to severe, not because it has been shown that there is little to no effect proven in case studies— but because the Patent expires which means other brands will be able to compete with generics. Forest Laboratories doesn’t want that, so they are forcing their patients to switch to the ‘time-release’ version, of which there is no known generic replacement. This is the type of company created by Howard Solomon.

Educated at Yale and Cambridge, Andrew Solomon became the poster child for the pharmaceutical industry when, at 31, he was able to overcome depression with the help of Celexa, which put Forest Laboratories on the map. Celexa became one of the fastest selling anti-depressants on the market, despite the danger it posed if prescribed to younger patients. In fact, FDA approval was based to a significant degree on the results experienced by Andrew Solomon.

In 2011, Howard Solomon was publicly reprimanded for aggressive marketing of Anti-depressants to children. Forest Labs was fined $313 Million and faced being excluded by the Office of Inspector General. This would mean no more dealings with Medicaid, Medicare and the Veteran’s Administration.

Although touted as the poster child for anti-depressants, Andrew Solomon is really one of the greatest examples of how these drugs lead to a life-long addiction. After some time on a combination of anti-depressant drugs, Andrew decided to quit ‘cold turkey’. The subsequent withdrawal symptoms were more than he could take so he was prescribed more medication to deal with his withdrawal produced anxiety. He began medically treating his depression in 1994 and as of March 2013 was still taking 5 different prescription medications daily!

(Note that it has been reported that Adam Lanza was prescribed Lexapro to deal with his issues, but stopped taking it after several days. The implication is that if only he had taken his medication, perhaps the mass murder could have been prevented.) 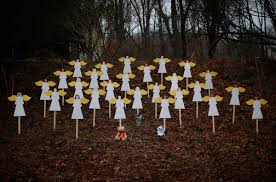 So, this is the author of the ‘alleged’ interview with Peter Lanza. I say ‘alleged’, because there is no way to verify that this actually took place. In the article, he states that he met with Lanza on 6 different occasions with one session lasting up to 7 hours !! Yet, the article itself seems to be full of 3rd party observations with very little inside information that only Peter would know. It is also full of contradiction.

Why do you suppose Peter Lanza would have sought out this guy to be the only one to do his exclusive interview with? For instance, Peter is quoted as saying “nothing annoyed him more in our conversations than speculation—by me, the media, or anyone else”. This is coming from the man who is also quoted, in the same article as saying “his son would have killed him, too, given the chance” ?!

The piece is also riddled with contradictory and conflicting information. In one part it says that Adam had sensory issues and did not want to touch anything, including metal door handles. It also says at one point he was unable to tie his own shoes. Yet, it is also claimed that Nancy decided it would be a good idea to take him to the local gun ranges so that he could fire a weapon. This not only defies logic, it has been repeatedly proven to be untrue as every gun range within a 50 mile radius has denied any knowledge of either Nancy or Adam having been there.

The article implies that Adam’s Asperger’s syndrome somehow ‘masked his schizophrenia’. None of his medical records have been made public and there is no evidence to validate that he was either autistic or schizophrenic.

It is reported here that he was home-schooled for 4 years and yet there were other reports that he attended Newtown High School! This entire article is a fabricated propaganda piece being used to further the agenda and to try to justify some of the preposterous evidence presented in the 7,000 page Police Report that is so difficult to decipher that a separate panel is being considered to analyze the report.

I could pick apart the story piece by piece to show you that it makes no sense. I could also show you how, in the 7,000 page Police Report, they fail to provide us with anything but inconsistencies and contradictions. Even the ‘photographic evidence’ is nonsensical. Who would furnish a $1.2 Million house with 20 year old crappy furniture? The staging of the pictures is blatantly obvious. Of course, that is not what I wish to do.

What I want to do is to awaken you to the prospect that this whole Sandy Hook story is a fabricated lie! There is so much evidence to prove that there has been manipulation and distortion of the truth throughout. It is right there for one to examine, if only they would take the time to look. 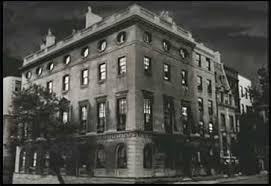 Andrew Solomon is a member of the Council on Foreign Relations. The Council on Foreign Relations (CFR) is an American nonprofit, nonpartisan membership organization, publisher, and think tank specializing in U.S. foreign policy and international affairs. The CFR is considered to be the nation’s “most influential foreign-policy think tank”. Its membership has included senior politicians, more than a dozen Secretaries of State, CIA directors, bankers, lawyers, professors, and senior media figures. It is essentially run by the Rockefeller Family and is probably the most influential body in the broad engineering our Society.

We are all so busy living our day to day lives, working at our jobs and taking care of our kids. But, this is something that requires our attention! It is through events like these that our history is altered. Mainstream media continues to propagate this story as if it is fact. Over the past few days the story of how Peter Lanza finally came forward to speak about the ‘killings’ has been covered by NBC, CNN, MSNBC and on countless internet sites. Yet no one anywhere got to see him or even a recent picture of him.

He told the story (through pill-popping elitist Andrew Solomon) of how, with proper mental health care and perhaps intervention by the State, this horrible event could have been avoided. As of 2012, more than 25% of children are on prescription medication. Imagine how much more profit can be made if we could get that number to 50% !!

With the advent of Obamacare, everyone will be subjected to certain ‘requirements’. We already have to have specific vaccinations to allow our children to attend Public Schools. It is a very small leap to think that they will require psychological profiling to determine a propensity to violence. These tests must be performed to prevent violence in our schools. Once diagnosed, it will be a requirement for the child to follow the recommended treatment, including proper medication.

This is not somewhere out in the distant future. This is in our hands right here, right now. I don’t want my children or my grandchildren subjected to this form of controlled personality management. Do you?

So there- now you have it. You have been informed of why there should be concern over what is happening in our society as a result of the Sandy Hook Hoax. Gun Control is just a small part of it. Now comes the push for mental health reform and the pharmaceutical industry is in it up to their elbows. How can you just sit by idly and let them take away the Freedoms that we have fought for ? If you call yourself a Patriot, a lover of this country, now is the time to stand up and be heard. We will not allow this to happen to our children!! The lies must end!!

I have always said that I would be the first to point out that “The Emperor has no clothes!” Now it is your turn.

148 thought on “The Sandy Hook-Psychopharma Connection”