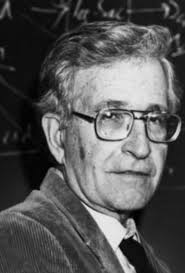 Chomsky is likewise indifferent to the possibility that forces within the US government had a hand in the events of 9/11, invoking “overwhelming evidence that the Bush administration wasn’t involved.”[1] Chiding those who may suggest otherwise, he adamantly concludes that “the Bush administration would have had to be utterly insane to try anything like what is alleged.” In other words, plans of such magnitude could not be successfully carried out without a good number of people knowing.[2] The system works, and thus the rule of law prevails.

In 1969 Chomsky made a conscious decision to avoid publicly addressing the assassination of President John F. Kennedy. Thereafter he “played an important role in the orchestrated debate which has focused the significance of the murder of Kennedy around the issue of the U.S. involvement in the war in Vietnam,” author E. Martin Schotz observes.[3]  Chomsky thus safely positioned himself to reject any notion that November 22, 1963 “was a high-level conspiracy” with “significance” for US foreign policy as “implausible to quite an extraordinary degree.” Again, as with 9/11, “evidence against this claim is overwhelming, from every testable point of view, remarkably so for a historical event.” Such evidence needn’t be produced, since confirmation of the position itself is less significant for Chomsky’s adherents than having the wise old sage disparage armchair physicists or “ordinarily rational” opponents who exhibit “a kind of cult-like reaction” toward JFK’s demise.[4]

If the figure in question were merely a run-of-the-mill commentator his remarks might be undeserving of serious consideration. Yet Chomsky is a powerful molder of public opinion, particularly among leftish intellectuals inclined toward political thought and engagement. With this in mind, the MIT luminary’s dismissal of curious and concerned citizens as “conspiracy theorists,” particularly in the wake of 9/11, has no doubt discouraged a broad and potentially influential swath of Americans from more seriously questioning the true motives behind the shadow state and the overall latitude it routinely exercises.

Indeed, Chomsky’s stance on critically evaluating momentous public events at least partly follows the rhetorical method laid out in Central Intelligence Agency Document 1035-960, the declassified dispatch sent to the Agency’s foreign bureau chiefs in April 1967. The document instructed personnel to touch base with “friendly elite contacts (especially politicians and editors)” and “propaganda assets” in an effort to shore up the Warren Commission’s “lone assassin” theory of the JFK assassination.

Having played key roles in the assassination and its cover-up, the CIA took a special interest in “discrediting the claims of the conspiracy theorists, so as to inhibit the circulation of such claims in other countries.”[5] Recommended techniques involve highlighting poorly-founded and often ridiculous positions. For example,

*Critics usually overvalue particular items and ignore others
*Conspiracy on the large scale often suggested would be impossible to conceal in the United States
*Critics have often been enticed by a form of intellectual pride, and
*No significant new evidence has emerged which [officials] did not consider[6]

Document 1035-960 suggests how enlisting the services of formal intellectuals and public opinion leaders was at least as important an objective for propping up the Warren Report’s “lone assassin” and “magic bullet” hypotheses as it is today in defending the official explanation of 9/11.

By the late 1950s many major US news media outlets had already been penetrated by the CIA to a substantial degree,[7] a phenomenon suggested in their overall disparagement of Warren Commission critics and vigorous defense of the official lone gunman thesis through the mid-to-late 1960s. Independent researchers and authors were routinely derided with terms such as “amateur sleuths,” “mythmakers,” and the now-familiar standby, “conspiracy theorists.”[8]

Such “[s]elf-appointed investigators” and “cocktail party dissenters,” Time magazine quipped, constitute a “cult of parlor detectives … at work throughout the nation.” Again, being motivated through a sort of elusive faith, the novices “have in effect turned the quest for the ‘real assassin’ into an evangelistic vocation.”[9]

Following the issuance of 1035-960, select intellectuals emerged in major media to present their ostensibly nonpartisan evaluations of JFK assassination “buffs,” and Warren Commission “doubters” and “skeptics.” One such scholar was Oxford University’s John Hanbury Angus Sparrow, a “Latinist and attorney by training,” whose expertise included “such disparate subjects as the Profumo Affair, Lady Chatterley and the plagiarisms of a 17th century Polish poet.”[10]

In late 1967 Sparrow wrote an 18,000-word commendation of critics and defense of the Commission’s findings that appeared in the London Times Literary Supplement. For Sparrow “the errors in the “‘critics’ reasoning are obvious” because, like today’s 9/11 eccentrics, they “’put forward good points and bad alike, mingle discredited assertions with valid evidence, and make up for weak links in their hypothesis by asseveration and abuse of the Dallas police, the FBI and the commission.’”

In terms repeated years later by Chomsky and similar progressive-left notables, Sparrow rails against the “contention that the [JFK] assassination was a consummately scripted plot” and “scoffs at the idea that a gunman could have fired from an exposed position and ‘got clean away in full view of the public.’” The “’demonologists’”—authors such as Joachim Joesten, Mark Lane, Edward Epstein, and New Orleans District Attorney Jim Garrison—are at an advantage given “’the old adage–populus vult decipi: the public is very ready to be deceived.’”[11]

Another Chomsky-like precursor in affirming the official version of events surrounding JFK’s demise was former Brandeis University dean and President Lyndon Johnson’s “intellectual in residence” John B. Roche. In fact, “Roche’s law” resonates uncannily with Chomsky’s emphasis on the light of day, sheer coincidence, and ham-fisted bureaucrats to dispel the likelihood of conspiracy.

“’Those who can conspire haven’t got the time; those who do conspire haven’t got the talent,’” Roche concluded. After all, any conspiracy would have been forcefully pursued by former Attorney General Robert F. Kennedy, Roche assures. “[T]he conspiracy theory may be gospel to ‘a priesthood of marginal paranoids,’” but “it is also ‘an assault on the sanity of American society, and I believe in its fundamental sanity.’”[12]

What almost goes without saying is that today’s finely tuned propaganda is presented under the guise of knowledge and expertise. Public opinion experts recognize how the spokesperson’s identification with and understanding of the target audience typically maximizes the message’s impact. The CIA recognized such subtleties early on, not only in its crafting of the “conspiracy theorist” smear, but also in utilizing highly credible figures to sow disinformation. This is precisely why it apparently deployed recognized Warren Commission critic Edward Jay Epstein to further discredit District Attorney Garrison’s JFK assassination investigation.

After having developed a relationship with CIA counterintelligence chief James Angleton, Epstein offered his services to the Garrison inquiry then left to write a lengthy and obliquely defamatory critique of Garrison and his methods for the New Yorker. “A subsequent CIA dispatch to chiefs of Stations worldwide,” author William Davy observes, “cautioned against attacking Garrison personally but provided them with Epstein’s article instead. The dispatch, which included a copy of the New Yorker article, instructed the Chiefs to ‘use the article to brief interested contacts.’”[13]

In a similar manner Chomsky’s activist credentials provide him with an advantage that some early Warren Commission defenders clearly lacked, adding the dimension of credibility that has become commonplace to maintain the status quo and the multitude of noble lies upon which it rests. Fifty years on, with the political capital accumulated through his combined scholarship and activist veneer, Chomsky has become an invaluable resource, capable of regularly assuring a broad and influential number of politically adept individuals that the intricate causes and objectives of deep events such as JFK’s murder and September 11 have no historical or political relevance. Indeed, if such an effective propaganda asset did not exist, they would have to be created or otherwise acquired for such crimes to be securely placed beyond the boundaries of acceptable exchange.

[7] Carl Bernstein, “The CIA and the Media, Rolling Stone, October 20, 1977. Available at http://www.carlbernstein.com/magazine_cia_and_media.php