As someone who has followed the Sandy Hook story and the subsequent push for increased gun control quite closely, imagine my surprise to learn from a June 2013 article published in the literary magazine Harper’s that the hue and cry around having the public’s access to weapons reined in may indeed be an ongoing dog-and-pony show intended for perception management only. The article, written by Dan Baum, titled “How to Make Your Own AR-15: The gun Congress can’t ban,” revealed a regulatory loophole that has made what they want us to believe is a “powerful assault weapon” as easily obtainable as home-baked bread.

We know that as a result of the Aurora and Sandy Hook shootings, several states (including New York and Connecticut) have instituted greater limits on assault weapons, magazine capacity, and licensing/regulation procedures for gun buyers. In spite of individual states tightening up, however, measures discussed by the Senate in April 2013 did not pass. The AWB, a 10-year federal assault weapons ban signed by Bill Clinton in 1994 expired in 2004, and we’re all expecting to see another such ban emerge any day now, particularly in the wake of the mass shootings that continue to occur (somewhat unbelievably) every few weeks.

Quoting the June 2013 article in Harper’s by Dan Baum:

But a federal ban won’t work. Modern firearms like the AR-15 rifle–the type of gun used at Aurora and Sandy Hook–aren’t really stand-alone weapons at all.  They are a collection of integrated components, which makes controlling their proliferation almost impossible. Even if federal gun-control advocates got everything they wanted (already an unlikely scenario), they couldn’t prevent America’s most popular rifle from being made, sold, and used. Understanding why this is true requires an examination of how the firearm is made.

The AR-15 is semiautomatic, meaning that, unlike a machine gun, it fires only one round with every pull of the trigger. (AR is short for ArmaLite, the company that first developed the weapon, not, as many assume, “automatic rifle” or “assault rifle”; the AR-15 is not a true assault rifle because it cannot fire continuously.) Part of the reason the gun is so popular is that it is modular; using only the tip of one of its bullets, you can snap it apart into a dozen pieces, including barrel, stock, bolt, and buttstock. AR-15 owners affectionately call it “Lego for grown-ups.” Shooters endlessly transform their rifles by swapping out components–a new chrome-lined barrel, a more ergonomic tactical grip, a carbon-fiber forward hand guard, laser sights–even to the extent of changing the gun’s caliber.

The only one of the AR-15’s many parts that carries a serial number is the lower receiver, a flat, hollow box a little smaller than a VHS tape. The trigger mechanism fits inside, and everything else attaches to the outside. No ammunition passes through it. Because the lower receiver alone is stamped with a serial number, it is the only part that is considered a firearm under the law and the only part of the weapon whose purchase is subject to background checks and other gun regulations. Everything else that makes the AR-15 a gun–the barrel, grip, stock, magazine, trigger, bolt assembly, and more–can be bought and shipped through the mail without any need for paperwork or government approval. Once a shooter has a single lower receiver, he can build himself an almost infinite variety of guns without anyone knowing what he’s got. […] 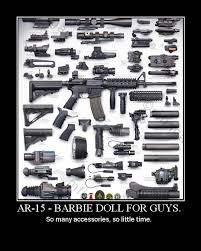 The market for the AR-15 is enormously lucrative. There’s always some new accessory to buy, and a gigantic components industry exists to feed the desire. (Another nickname for the rifle is “Barbie for men.”) The AR-15 is popular for the same reason the latest iPhone is popular: it’s the most advanced technology in its field. At a firearms-industry trade show in Las Vegas in January, which filled more exhibition halls than I was able to visit in two days, about two thirds of the booths sold parts and accessories for the AR-15. Visit a rifle range, and it’s pretty much the only gun you’ll see people shoot. Although it’s often portrayed as something that only a mass killer could possibly want, it is practically the whole gun business–a favorite among hunters, sport shooters, and for home defense. One in five guns sold in America last year (and more than half of all rifles) was an AR-15. To the common post-Sandy-Hook question “Who needs a gun like that?” millions of AR-15 owners reply, “Everybody.”

A bit like software for your computer, the AR-15 is modular.  And because it’s modular, it eludes “the radar.” If you make a gun yourself, there is no requirement to bother with licensing, per the federal Gun Control Act if 1968, created at a time when to do so required expensive tools and specific skills (like forging steel).  More from Harper’s:

In November 2012, Cody Wilson, a 25-year-old law student at the University of Texas at Austin, produced a prototype AR-15 receiver, made of plastic, using a 3-D printer. He can legally build himself as many of those as he likes.

In December, Wilson dressed out one of his freshly made plastic receivers with the rest of the AR-15’s components and fired it. The media went wild, breathlessly predicting a day when teenagers hiding in their bedrooms could print out plastic assault rifles. They didn’t quite get it right; the parts of the AR-15 that come in contact with the cartridge–the bolt and barrel–need to be made of metal because of the high pressure generated by ammunition as it fires. Wilson’s receiver fired six shots but cracked–not from the blast pressure, but at the point where the stock attaches. After some modifications to the plastic formula, he achieved a model capable of firing at least 1,000 rounds. Wilson is distributing the design for free on the Web. Anybody with access to a 3-D printer–regardless of age, mental health, or criminal history–can make himself the very piece of an AR-15 that the government nominally controls.

The FireArms Freedom Act, initially passed by the Montana State Legislature in 2009, has been copied by some 32 other states. It’s a “what’s made in our state and stays in our state is exempt from federal regulation” declaration, as the Constitution only gives Congress the right to regulate interstate commerce. And somebody had another idea: the 80% receiver. Continuing from Harper’s:

A home hobbyist who wants to manufacture his own AR-15 doesn’t need an $80,000 CNC [computer numeric control] machine. He doesn’t even need a 3-D printer. Instead, he can visit the website of Richard Celata, who single-handedly runs a company called KT Ordnance out of his home in, yes, Montana.

Celata specializes in something called the “80-percent receiver”–that is, an AR-15 receiver that is 80 percent finished. Several other companies produce them as well. Celata … leaves just enough holes undrilled and sections uncut to keep his receivers from being considered firearms. He doesn’t need a license to make them, buyers don’t need to go through a background check to buy them, and they can be sent through the mail as freely as books. A buyer with a drill press and a hacksaw can finish the job in a couple of hours, and, once he’s assembled the rest of a gun’s components, will legally possess an untraceable semi-automatic rifle. Because an 80-percent receiver is not technically a firearm, no ban can touch it, and once the hobbyist finishes it and builds it into a working gun, he’s protected by the homemade-gun exemption as long as he doesn’t sell it or give it away. On his website, Celata was offering 80 percenters for $250.

How hard it is to finish off such a thingamabob and become a real-live Annie Oakley? Writes Dan Baum in Harper’s:

[Celata] placed an 80-percent receiver in my hands. It took me a moment to discern the ways in which it differed from a completed one. The big difference, I could see, was that it had no hollow in which to fit the trigger mechanism. It came with instructions detailing exactly where and how big a cut should be made there, and where to drill about half a dozen bolt holes. “I’ve sold more than 10,000 of these,” he said. None of them had been reported to the federal government as gun sales, nor did anybody know anything about the people who bought them – although I should note that I’ve never come across a report of a killing in which a homemade AR-15 was mentioned. The federal assault-weapons ban was in effect for six of the years Celata has been making 80-percent receivers. But he might as well have been selling frying pans or shovels for all his business was affected.

“Do you have a drill press?” he asked. I shook my head. “Then you can use mine!” He stood at my shoulder, helping me interpret the instructions and giving me pointers, assiduously complying with the law by making me finish the receiver with my own hands. I drilled half a dozen holes of various sizes, carved out the oval slot through which the trigger would protrude, and used a band saw to remove a section about an inch square to make room for the trigger mechanism. The whole process took about half an hour.

“It’s an American tradition to make your own guns,” Celata said, clapping me on the shoulder. “We’ve always been innovators. Guns are part of America. You can’t get rid of them.”

While it’s true that the AR-15 was the reported weapon of choice at Sandy Hook and Aurora (and if you have been reading this blog, you know that both these stories are very fishy), it is apparently used in only 3 percent of all murders, compared to handguns, which take the cake at 50 percent. The author of the Harper’s article aptly points out that “When it comes to crime, the AR-15’s significance is mainly symbolic.”

We could [ban] the 80-percent receiver–because it’s officially not a gun, it enjoys no Second Amendment protection–but that raises the question: At what percentage completion is an inert piece of metal a potential firearm, and who gets to decide? We could decide that it’s a crime to make one’s own gun or to download digital designs for a receiver or high-capacity magazine, or we could simply outlaw the possession of the AR-15 no matter how one obtains the parts. But any of these measures would face constitutional challenges. More to the point, neither party’s leadership seems tempted to press the issue.

So this is why I call the whole thing a dog and pony show. Realizing that even I (a small woman), if helped by a patient masculine type and not too freaked out by a noisy machine, could legally finish off a thingamabob to make it the main component of a powerful firearm and then simply add all the necessary bits and pieces to complete it–avoiding all the nosy government paperwork–wow! Then what is all the fuss about? Obviously, the dog and pony show (i.e., gun hubbub) is entirely political, intrusive, and ultimately silly if you know anything about what I have just outlined above. It must be just a way to influence public thinking: sheeple people who think you have to get everything at a store.

With the huge hype over Sandy Hook and the soulless eyes of a photoshopped Adam Lanza staring at us from the television screen, guns were finally stamped with permanent Boogieman status in mass-market America. As the parents cried crocodile tears and reiterated cheesy memories of what now seem to be not-at-all-departed children, were they aware that all over America home hobbyists might be passing the word about how to painlessly skip all the B.S.? And what other inflamed issue does it sound like? “At what percentage completion is an inert piece of metal a potential firearm …” You have only one guess and the answer is … (abortion). And yes, who gets to decide?