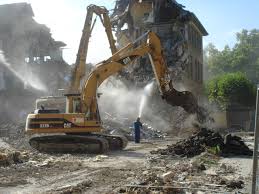 Employees of a construction company contracted by Newtown to demolish Sandy Hook Elementary School must sign non-disclosure agreements before commencing work on the project, scheduled to begin October 21. The contracts reserve the right to pursue legal action against workers who publicly discuss what might be observed as the 57-year-old structure is leveled. Penalties also apply to employee attempts at removing any physical remains from the site.

Exhaustive in scope, the agreement requires workers to refrain from leaking information on virtually anything encountered on Sandy Hook grounds during or after their time of employment with Consigli Construction, the company subcontracted to carry out the demolition.

No unauthorized disclosure or removal of confidential information from the school, including any oral, written, graphic, software, technology, or virtually any items that belong to the school.

No publication or posting of any information related to the project, and no photographs, drawings or other images of the school; no removal of any items from the school from dirt and bricks to doorknobs and window glass; any town documents be returned to the town; these commitments survive beyond the conclusion of an individual’s employment.[1]

Newtown officials claim that such far-reaching precautions are necessary to preserve the privacy of victims’ families. “It’s a very sensitive topic,” Newtown Selectman Will Rodgers said. “We want it (the site) to be handled in a respectful way.”[2]

Newtown First Selectman E. Patricia Llodra similarly noted how the goal involves preventing exploitation of any building remnants. “We’re going to every possible length to eliminate any possibility that any artifacts from the building would be taken from the campus and … end up on eBay,” she told the Associated Press. [3]

Much of the building’s debris will be thoroughly crushed and hauled away to an unnamed location. Newtown also is requesting documentation that non-destructible metal and similar materials are taken off-site and destroyed.[4]

The Sandy Hook investigation has proceeded under a cloak of unusual secrecy, with very little substantive evidence or documentation disclosed that might reveal what exactly took place on December 14, 2012 and, moreover, Adam Lanza’s culpability. The corporate media have nevertheless proceeded to push a narrative with Lanza as the sole culprit.

Llorda and her Newtown cohorts swung into action three weeks ago on September 24 when Connecticut Governor Dannel P. Malloy offered the township $50 million to tear down Sandy Hook School and build a new facility.

The $50 million price tag is seven times the average cost of building an elementary school in the United States ($7,393,000), according to ReedConstructionData.com.[5]

On October 5 Newtown leaders presented residents with a referendum to accept the $50 million that passed by a nine-to-one margin.

On October 7 contractors were on the Sandy Hook campus to begin drawing up plans for the project.

On October 11 the Newtown Bee reported that local authorities received a go-ahead from the State of Connecticut to contract with remediation vendor Bestech to oversee the entire venture.[6]

This means town officials will not have to go out and bid for a separate demolition contractor. Llodra notes how the use of a single entity will allow a two-to-three-week jump on work at the site, wholly ensuring that both the structure and post demolition debris will be removed by the first anniversary of the shooting.

Further, the use of Bestech will also minimize the number of workers on the site, allow for easier security credentialing, and thereby ensure controls preventing the unwanted acquisition of any debris or images generated during the demolition process.[7]