Persuading the Left Intelligentsia on Syria 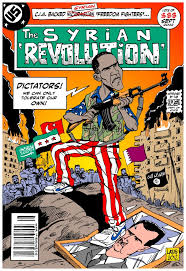 Barack Obama’s fervent drive for yet more war carries a number of important lessons in terms of propaganda and the extent to which the “progressive left” literati can be persuaded to jump on the homicidal bandwagon.

The forces behind Syria’s destabilization have employed an array of public relations maneuvers to sway public sentiment and hone in on the support of key constituencies, including credentialed intellectuals and opinion leaders.

This became abundantly clear to many in 2011 as the mercenary guerrilla forces within Syria were self-referentially labeled “activists” and “rebels,” a falsehood that continues to be unquestioningly echoed throughout Western corporate media [1] and its “progressive” alternative counterparts such as Democracy Now! As Finian Cunningham observes, because such programs are presented as ostensibly “critical, independent journalism,” they serve “to sow powerful seeds of misinformation in a way that the ‘compromised’ mainstream media cannot.”[2]

Similar ploys include “astro-turf” outlets purporting to represent genuine causes. One such organization appears to be the Global Campaign for Solidarity with the Syrian Revolution (GCSSR). The GCSSR has managed to obtain the signatures of close to one thousand prominent European, American and Middle Eastern academics and public intellectuals on its petition, “Solidarity with the Syrian Struggle for Dignity and Freedom.” Perhaps the support is unsurprising, especially since the document presents Syria’s coordinated subversion with genuine indigenous uprisings throughout the world.

“The fight in Syria is an extension of the fight for freedom regionally and worldwide,” the petition’s preamble reads. Syria’s insurrection

is a fundamental part of the North African revolutions, yet, it is also an extension of the Zapatista revolt in Mexico, the landless movement in Brazil, the European and North American revolts against neoliberal exploitation, and an echo of Iranian, Russian, and Chinese movements for freedom.

This captivating rhetoric closely conforms to the Obama administration’s “humanitarian intervention” and “responsibility to protect” publicity lines, even though now GCSSR claims to oppose Obama’s impulse toward “war and imperialism” that is  a logical extension of a much broader plan.[3] Yet in scratching the surface of the “Global Campaign,” it is difficult to ascertain any distinct institutional makeup or personnel behind it.

This author’s repeated requests via GCSSR’s Facebook page to communicate with a spokesperson have been met with silence. Still, the organization’s ambiguity has not prevented it from successfully garnering the broad endorsement of figures seduced by its renegade branding.

One is oddly reminded of how overall distant the media manipulation tactics appear that were used in the lead up to the 1991 Gulf War—indeed, ones that targeted a much broader and presumably less sophisticated population. At that time a front group for the Kuwaiti government called the Citizens for a Free Kuwait conducted a multimillion dollar promotional campaign to sell its war to the American people. This impressive undertaking was overseen by the powerful Hill and Knowlton public relations firm and culminated in a fifteen-year-old Kuwaiti girl’s testimony before the phony congressional Human Rights Caucus.

“Nayirah” claimed to be a volunteer at a hospital in Kuwait when Iraqi forces entered the facility. “While I was there I saw the Iraqi soldiers come into the hospital with guns,” “Nayirah” recalls, “and go into the room where 15 babies were in incubators. They took the babies out of the incubators, took the incubators, and left the babies on the cold floor to die.” [4]

The “eyewitness account” provided the basis for continual denunciations of the Iraq army’s alleged atrocities by those American political leaders angling for war. Yet it later turned out that Nayirah was the daughter of Kuwait’s ambassador to the United States, and before her testimony she had been coached by Hill and Knowlton staff. In the end the initial story of hundreds of Kuwaiti newborns cast out of their incubators was discredited.[5]

Still, the effort was ultimately successful, as it conned the American people into backing a conflict that stole an anticipated Cold War peace dividend, presaged the slow deaths of half a million Iraqi children via US-led sanctions, and paved the way for America’s far-expanded and destructive role in the Middle East.

Much like the George W. Bush administration’s “weapons of mass destruction” ruse, there is a degree of primitiveness in the deceptive effort leading to the Gulf War vis-à-vis the clever and overall low-cost maneuvers encompassed in those such as GCSSR. The latter entails a more flagrant and Orwellian manipulation of political codes whereupon empty appeals to “democracy,” “solidarity,” and “struggle” direct passions toward ends far removed from their historical bearings and original intent.

America’s political myopia is perhaps most abundantly clear in the enigma that is Obama—a personage who enthralls his supporters with well-crafted platitudes that rouse veneration once reserved for genuine leaders. In his hypocritical and now increasingly isolated worldview where war is peace, freedom is slavery, and ignorance is strength, the obligation to act on humanitarian grounds likewise wraps coldblooded aggression in the adornments of morality and deliverance.

28 thought on “Persuading the Left Intelligentsia on Syria”