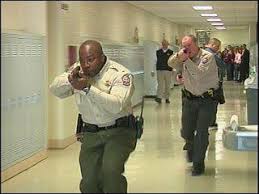 “It’s as close as we can get to the real thing without people getting hurt. The [new] drills coach officers to directly engage the shooter instead of waiting for specialized SWAT teams to arrive.”-ALERRT Program Research Director J. Pete Blair

With the school year now underway a flurry of federally-coordinated “active shooter drills” are taking place across the country. The exercises are part of a broader program the FBI is carrying out as a result of an Obama’s directive following the December 2012 Newtown school massacre.

The FBI has teamed up with an existing active-shooter training program —Advanced Law Enforcement Rapid Response Training (ALERRT) — begun in Texas after the 1999 Columbine High School shootings and funded in part by the US Department of Justice. The FBI sent roughly 100 tactical instructors to ALERRT training and then placed them throughout the US to oversee mock terror exercises with local law enforcement agencies.

“Officers and instructors were divided into gunmen, responders, hostages and victims and given real-life scenarios that test their ability to enter a building and confront a shooter,” according to an Associated Press report.

“The officers, in blue protective helmets, fired non-lethal projectiles from lookalike handguns — enough to make a loud “pop” and sting on impact … “In that kind of event, you can never get to the point where it’s real life. Always in back of the officer’s head, they know, ‘I’m not actually going to die. No one’s being killed,'” said J. Pete Blair, the ALERRT program’s research director and an associate professor at Texas State University-San Marcos. But, he added, “It’s as close as we can get to the real thing without people getting hurt. The [new] drills coach officers to directly engage the shooter instead of waiting for specialized SWAT teams to arrive … The protocol marks a stark shift from past training that focused on containing the scene, controlling the perimeter and calling for SWAT help. That strategy, though widely accepted at the time, was criticized as too slow and painstaking after the Columbine shootings.” [1]

Since these exercises are designed to be as realistic as possible, students, school personnel and the broader public may be unsuspectingly caught up in the contrived terror, unable distinguish whether the “actors” alongside the accompanying gunfire and explosions are real or fake. This important facet is left up to the relevant agencies to explain to the press.

Further, such events are purportedly carried out to ensure civilians’ “safety” while sharpening police officers’ skills in “real life” environments. Yet local communities and the families of frightened children might wonder why military training-style maneuvers have to be carried out with their loved ones as props, especially in light of the fact that the entire program is based on an event the public still has only limited information about.

Such government mandates and exercises also call up several deeper questions that will scarcely be considered by those claiming to act in out best interest. For example, aren’t these trainings a fundamental component toward convincing young people and the broader public that virtually no place is safe? Through such drills and increasingly militarized policing isn’t it safe to conclude that those authorities suggesting the sole remedy for possibly being in the wrong place at the wrong time is a virtual police state?

Moreover, when one takes into consideration the slipshod and even downright dishonest nature of so much journalism today, such drills may in fact provide the basis for the carefully coordinated news spectacle should they “go live,” thereby providing further rationale for the perpetual state of terror and surveillance the nation presently finds itself in.

It is important to note that just as these drills were taking place a real event transpired in Decatur, Georgia—indeed, one that at first glance is difficult distinguish from the many federally-orchestrated shooter drills, not to mention the 2012 Sandy Hook School massacre. A 20-year-old gunman dressed in black and carrying an AK-47 allegedly found his way into the Ronald E. McNair Discovery Learning Academy  where a school secretary occupied him with small talk long enough for police to arrive. “The gunman also held other employees hostage,” the New York Times reports. When police made it there

the gunman stepped outside of the building and fired four to six shots, and went back inside, the police said. An officer returned fire. [school clerk Antoinette] Tuff said he wanted to go back outside but she told him to empty his pockets and backpack and to put his weapons down. “He got down on the floor, but when the police officers came in, he was actually laying on the floor with his hands behind his back,” she said. [2]

The Decatur Township School District received FEMA training in emergency management response less than one month ago. At the conclusion of that training Decatur Township School Board President and Fire Department Chief Dale Henson observed, “As leaders, there is no better way to spend our time than preparing for incidents which we hope will never occur, but for which we must be ready, in order to protect our most precious resources – our children and those who work in our schools to enrich their lives.” [3]

The following are brief excerpts and citations of news articles on some of the mock terror events carried out throughout the US since August 1, 2013.

“In the scenario: A school bus is en route to an event when suddenly it’s hijacked! A camera inside the bus captured the whole thing while an audience of school teachers, administrators and transportation directors watched it all unfold on a live feed. ‘Every driver, administrator will take something away from this saying that this could actually happen on my bus. That’s what our focus was. This could happen on any bus’, says Jeff Culler, Rossford Schools Transportation Director.”

“’The police came in and they were like, “Get down! Get down!” becausethey didn’t know if there were shooters or not,’ said student Brian Cheda. ‘I actually thought I was going to get shot for a moment. I was really scared.’ Cheda, who played the role of a student calling for help, gets shot in the drill — not by police, but by an active shooter. Other students were inside too.”

“The scenario is terrifying: An armed gunman is atta[c]king students at U of H Downtown and the university police are learning state of the art tactics to protect the students and faculty.”

“Will Nash, spokesman for the Long Beach Fire Department, said emergency workers were particularly focused on practicing a process called simple triage and rapid transit/treatment. The idea is to remain calm in an active-shooter situation while quickly caring for those most injured … The wounded were carried to a small lawn near the 7th Street entrance to the campus, where staff from St. Mary Medical Center, clad in bright orange vests, cared for them. By 10:35 a.m., about an hour after the exercise started, campus officials released the first injury count, which included 11 critically, with three “transported” to St. Mary Medical Center, two to Long Beach Memorial Medical Center and one to Harbor-UCLA Medical Center, a county-run trauma center near Torrance.”

“Joy Ranko, who also works in the prothonotary’s office, kept watching the clock waiting for the drill to start at 3 p.m. But when the “gunman” fired three blanks in succession near the office, Ranko took cover behind the front desk and saw a stranger standing just a few feet away. She still had goosebumps and was flustered moments after authorities apprehended the fake gunman.”

“Penn Township Police Chief James Laughlin never wants to face a scenario like the Sandy Hook school shooting. Even so, he realizes that preparing to respond to a similar event is a valuable exercise. ‘These incidents are real and happening today,’ Laughlin said. ‘That’s why we continually have to train and be prepared. We have to have some sort of edge to help ourselves. The citizens expect that and deserve for us to be prepared to encounter that.’”

“The drill … will include staged first responders from the Sheriff’s Department, Springville Police Department, New York State Police and Springville Fire Department. There will be five staged ‘victims,’ and SWAT members will take EMS personnel to the victims. Plastic weapons will be used.”

“Students and teachers are only days away from the start of the new school year, and the Homewood City School district is taking time to revamp security measures. Educators with the district met at Homewood High School for active shooter training.”

“These instructors are top-notch. They’ve been all over the world,” [Johnstown officer Erin Kabler] said. “We’re drawing from all their experience and things they’ve done, things they’ve seen and actual action reports.” “The whole paradigm changed. Up until the late-’90s – in fact, 1999 – the local officers would surround the situation and isolate it, then call a SWAT team,” [Kentucky policeman Don] Alwes said. “After Columbine, everyone understood you can’t wait for a SWAT team. A SWAT team is at least an hour away and people are dying.”

“What [this drill] does is it is designed to make you start thinking about possible scenarios that could happen,” said Clarksville Superintendent Dr. David Hopkins. ”It allows you to work through these scenarios in your mind so that at least you’ve thought about it, at least you don’t lock up because you don’t have a plan.”

“’We had our shooter first go into the Community Center, and he “shot” some people there before making his way to the Suite 3 of the dorms,’ Chief of University Police Tom Mackel said. ‘Once there, our officers were able to locate and confront him and then neutralize the shooter.’ The two buildings were populated by student actors who will be working as RAs in the coming school year … The department set up a mock dispatch center, which received calls from the students who were present in the sites. The dispatchers handled the calls as if they were normal calls, sending officers where they were told they were needed.” 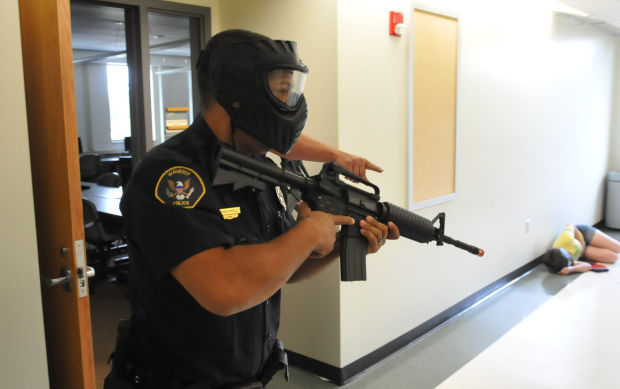 Waverly police officer Tony Krull works his way through a hall make Tuesday, Aug. 20, 2013, during a training exercise at Wartburg College. The scenario featured an active shooter on campus.

“For the second year in a row, the first week of school will see increased police presence around the schools, particularly in the mornings, at lunch and when school lets out. Superintendent of schools Rod Weston said he appreciates law enforcement’s efforts to keep the schools safe. He said strong relationships between teachers and students is [sic] an integral part of ensuring safety at schools. ‘Students often know if something is up, and if they have a good relationship with teachers they will feel comfortable enough to bring it up,’ he said[, adding] Taos schools are probably safer than most schools around the country.”

“’In this day and age you have to look at what’s happening around the nation, said John Ojeisekhoba, chief of campus safety for Biola. ‘It can happen anywhere. We’re not immune.’ More than 100 sheriff’s deputies and 12 Biola public safety officers participated in the two drills that took about one hour. Ojeisekhoba said it went well. ‘We have trained with the Sheriff’s Department at Monterey Park,’ he said. ‘We do training regularly with their tactics. Now we had the chance to conduct a joint training exercise.’”

“’I’ve had a lot of people come to me and say they don’t really care what the education provides if you can’t keep your children safe,’ Morgan County Schools Superintendent Bill Hopkins said. Multiple law enforcement agencies were involved in the drill, including the Alabama Alcohol and Beverage Control Board, the Morgan County Sheriff’s Department and the Priceville Police Department. ‘This really gives them, the school administrators and the faculty, the tools they need to deal with the situation prior to a law enforcement response,’ said Alabama ABC Sergeant Wayne Mackey. About 30 school administrators attended the drill, which began with a Power Point presentation and finished with the shooting and lockdown simulation.