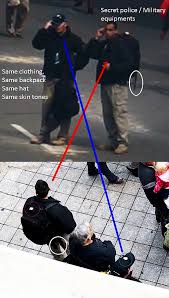 The following draws on artifacts from the forthcoming Boston Marathon Bombing Timeline.

On  June 6, 2013 “Operation Urban Shield Boston” published videos via its YouTube Channel highlighting the so-named 2011 and 2012 law enforcement and emergency response drills that bore a remarkable resemblance to the April 15, 2013 Boston Marathon bombing allegedly carried out by Tamarlan and Dzokhar Tsarnaev.

Two days after the videos were distributed the Boston Globe reported that the entire April 15 Boston Marathon bombing and its aftermath indeed played out almost in identical fashion to the Department of Homeland Security-sponsored terrorist drill scheduled for June of 2013.

A foremost project of the Cytel Group Incorporated, Urban Shield designs staged terror drills in major cities throughout the United States.[1] This from the Cytel Group’s website:

The list of Urban Shield’s “sponsoring agencies” includes dozens of local and regional US law enforcement entities, in addition to the Federal Bureau of Investigation, the Bureau of Alcohol, Tobacco, Firearms and Explosives, the Federal Emergency Management Agency, the Drug Enforcement Agency, the countries of Brazil, Guam, Norway, Switzerland, the State of Israel, and the Israeli National Police.[2] Israeli newspapers reported that a trip by representatives of the Israeli Police was planned prior to the April 15 attack to collaborate on such maneuvers.[3]

The anticipated June 2013 exercise scenario was painstakingly planned: A homegrown terrorist group called “Free America Citizens,” intending to injure scores of people around Boston, would leave backpacks filled with explosives at Faneuil Hall, the Seaport District, and nearby towns, spreading waves of panic and dread. Detectives then would pursue and catch the culprits. Urban Shield was developed to train dozens of detectives in the Greater Boston area to work together and thwart such a threat.[4]

“The real thing happened before we were able to execute,” a law enforcement official intimately aware of the planned exercise said. “We’ve already been tested.” This would have been the third year for the 24-hour Urban Shield training exercise developed to test the response of law enforcement and other public safety personnel in a major emergency. The training is made possible by a $200,000 Homeland Security grant and will probably be rescheduled for early next year, one official states.

The basic plot involved having members of Free America Citizens gauge the police response to a bomb scare. The “terrorists” would plant hoax devices, then stay on the scene to monitor and record the bomb squad and detectives as they responded. Yet the participating detectives would not have known they were being observed, only that they were responding to a real terrorist threat. The goal of the training was for such personnel to figure out the motives of Free America Citizens as they investigated the case, a Boston police official said.[5]

The planned exercise has uncanny similarities to the April 15 attack and ensuing police investigation that led to the capture of the alleged Boston Marathon bombers, Tamerlan and Dzhokhar Tsarnaev, whose images were caught on video cameras and who were captured after a car chase and shoot-out with police. Officials intend to repeat Urban Shield at a future date. A police spokeswoman declined to say what a new training event might look like. “We can’t talk about what we’re doing for emergency preparedness,” she said. “The people who participate in this don’t know what the scenario is.”[6]

Republished at Global Research on August 12, 2013.