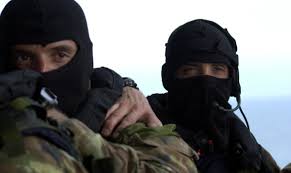 The news media’s readiness to accept official pronouncements and failure to more vigorously analyze and question government authorities in the wake of “domestic terrorist” incidents including mass shootings and bombings contributes to the American public’s already acute case of collective historical amnesia, while further rationalizing the twenty-first century police state and continued demise of civil society.

is because no one did anything substantial about Watergate. And the reason Watergate happened is because there were no consequences from the Bay of Pigs. They’re all the same operatives—the foot soldiers at the Bay of Pigs, the plumbers that got busted at Watergate, the gunrunners in Iran-Contra—all the same people, same faces. Now it doesn’t take a genius to figure out the connection here: A secret government beyond the control of the people and accountable to no one. And the closer we are to discovering the connection, the more Congress turns a blind eye to it. “We can’t talk about that in open session,” they say. “National security reasons.” The truth lies dormant in their laps and they stay blind out of choice. A conspiracy of silence.

Twenty years later amidst the vast outsourcing of intelligence and military operations many more events may arguably be added to such a shadow government’s achievements—the 1993 World Trade Center bombing, the 1995 Oklahoma City Murrah Federal Building bombing, the September 11 terror attacks, the non-existent weapons of mass destruction prompting the occupation of Iraq, the July 7, 2005 London bombings, the shoe and underwear “bombings”—all of which have contributed to the official justification of imperial wars abroad and an ever-expanding police state at home.

Lacking meaningful contexts with which to understand such events in their totality the general public is incapable of recognizing the road it is being forced down. The most recent set of events that give pause are the horrific, military-style shootings in Aurora, Colorado and Oak Creek, Wisconsin that authorities maintain were carried out by “lone wolf” gunmen.

A potential backdrop and precursor to the Colorado and Wisconsin events is the oft-forgotten Operation Gladio, a campaign involving US and British intelligence-backed paramilitaries anonymously carrying out mass shootings and bombings of civilian targets throughout Europe. Hundreds of such attacks took place between the late 1960s and early 1980s by “stay behind armies” of right wing and fascist saboteurs in an overall effort to terrorize populations, deploy a “strategy of tension,” and thereby maintain a centrist political status quo.[1] In the uncertain environment the petrified citizenry pled for stepped-up security and stood poised to part with personal freedoms. At the same time the maneuvers allowed for political adversaries—in Gladio’s time socialist and communist groups—to be blamed for the attacks and thereby demonized in the public mind.

The string of still unresolved US political assassinations throughout the 1960s suggest how such practices were not restricted to foreign countries. Nor were they solely the terrain of intelligence agencies. Along lines similar to Gladio, in the early 1960s the US Joint Chiefs of Staff proposed Operation Northwoods, where terrorist attacks would be initiated against US civilians in American cities and the violence blamed on Cuban combatants to justify war against the island nation.[2] The Kennedy administration rejected the proposal. While Northwoods exhibited the capacity for government to conceive and propose such plans, Gladio was demonstrably carried out against Western civilian populations in multiple locations over many years.

Consideration of Gladio and Northwoods might be dismissed were it not for early eyewitness accounts following the Colorado and Wisconsin shootings contending how there were two or more killers present at each incident—testimonies contradicting official government narratives that have accordingly been suppressed in the public mind.[3]

As communications historian Christopher Simpson observes, “the tactics that created the [Gladio] stay behinds in the first place are still in place and continue to be used today. They are standard operating procedure.”[4] Such potential explanations will appear foreign to an American public that is systematically misinformed and easily distracted. And in times of crisis especially that very public is tacitly assured of its safe remove from such practices, looking instead to political authorities and experts to reestablish a stasis to the carefully constructed “reality” major media impose on the mass psyche.

In this alternate reality Gladio has effectively been “memory-holed.” A LexisNexis Academic search for “Operation Gladio” retrieves a mere 31 articles in English language news outlets—most in British newspapers. In fact, only four articles discussing Gladio ever appeared in US publications—three in the New York Times and one brief mention in the Tampa Bay Times. Barring a 2009 BBC documentary [5] no network or cable news broadcasts have ever referenced the maneuver.

Almost all of the articles related to Gladio appeared in 1990 when Italian Prime Minister Giulio Andreotti publicly admitted Italy’s participation in the process. The New York Times downplayed any US involvement, misleadingly calling Gladio “an Italian creation” in a story buried on page A16.[6] In reality, former CIA director William Colby revealed in his memoirs that covert paramilitaries were a significant agency undertaking set up after World War II, including “the smallest possible coterie of the most reliable people, in Washington [and] NATO.”[7]

Gladio’s successful concealment for so many years demonstrates how mass atrocities can be carried out by a shadow network with complete impunity. Most incidents from the Gladio period remain unsolved by authorities. In the US, however, a plausible narrative appears to be required for public consumption. For example, just a few hours after the Wisconsin Sikh temple shooting Bureau of Alcohol, Tobacco, and Firearms (ATF) and Federal Bureau of Investigation (FBI) officials swept in and wrested the case from Oak Creek authorities by classifying it as an act of “domestic terrorism.”[8]. Less than twenty four hours later one of the federal government’s foremost de facto propaganda and intelligence-gathering arms—the Southern Poverty Law Center (SPLC)—developed a storyline that was unquestioningly lapped up by major news media.[9]

In an August 6, 2012 Democracy Now interview with SPLC spokesman Mark Potok and Milwaukee Journal Sentinel reporter Don Walker, Potok explained in unusual detail how the alleged killer was involved in “white supremacist groups,” “Nazi skinhead rock bands,” and that the SPLC had been “tracking” the groups he was in since 2000. Potok’s remarks, which dominate the exchange and steer clear of the suspect’s experience in psychological operations, contrasted sharply with Walker’s, who more cautiously pointed out that the suspect’s “work in [US Army] PsyOps is still a bit of a mystery to all of us … We talked to a psychiatrist who said that [being promoted to PsyOps is] like going from the lobby to the 20th floor very quickly.”[10]

Like the Aurora Colorado storyline of a crazed shooter who expertly booby-trapped his apartment with exotic explosives, such appealingly sensationalistic narratives serve to sideline the countervailing testimonies of eyewitnesses and are difficult to contest or dislodge once they are driven home by would-be experts through almost every major news outlet.

A similar scenario played out in the wake of the Oklahoma City federal building bombing when the ATF, FBI and SPLC together constructed the dominant frame of Timothy McVeigh as the lone bomber, an account that likewise diverged with the local authorities’ initial findings, early news reports of unexploded ordinance and a mysterious accomplice of McVeigh, and the overall conclusions of the Oklahoma City Bombing Investigation Committee’s Final Report.[11] The narrative nevertheless served to maintain the political status quo while securing the Clinton administration’s second term in office. To this day most Americans believe McVeigh was solely responsible for the bombing despite overwhelming evidence to the contrary.

For its time Raplin’s prognosis was an accurate description of America’s cascading socio-political nightmare. Elected officials abdicate their responsibility of oversight for personal gain and thus perpetuate “a conspiracy of silence.” Yet over the past two decades, the quickening pace of “terrorist” events suggests how shadow networks have grown in boldness and strength, while each attack has contributed to the steady erosion of civil society and constitutional rights.

With this in mind both the mainstream and “alternative” news media, through their overt censorial practices, their consistent failure to place events in meaningful historical contexts, and their overall deliberate obeisance to dubious and unaccountable authorities, compound this conspiracy by ensnaring the public in questionable realities from which it cannot readily escape.

36 thought on “False Flag Terror and Conspiracies of Silence”