When mass shootings take place in the United States, corporate news media can almost uniformly be counted on to act as stenographers to power. They dutifully report exactly what they’re told by authorities with wholehearted trust and close to no due diligence. This appears to have been the case yet again in the May 23 Isla Vista California mass murder.

The public has been propagandized with a familiar storyline that law enforcement authorities have peppered with lurid details–including a disturbing “manifesto” and YouTube soliloquy from a well-to-do yet alienated man who had trouble forging relationships, so he went on a wild shooting spree then committed suicide.

Like numerous other tragic events that cry out for heightened measures against gun ownership, such as the Tucson shooting, the Sikh Temple bloodletting, the Aurora movie theatre massacre, and the Newtown school shooting, initial eyewitness accounts of what took place differ markedly from what news media presented in subsequent reports—those laid out in law enforcement press conferences just hours after the event.

Otto von Bismarck famously remarked, “Never believe anything in politics until it has been officially denied.” In a society where the Second Amendment and gun violence have been vigorously politicized by powerful “reformists” like billionaire Michael Bloomberg, Attorney General Eric Holder, and President Barack Obama, journalists might be well-served by keeping this dictum in mind.

What became the acceptable storyline remains dubious given initial reports of the event. For example, Michael Vitak, a University of California Santa Barbara student from the Czech Republic, stated in a live televised interview that he saw more than one gunman–“’guys in a BMW. Maybe they were trying to prove they’re tough.’” Vitak claims to have witnessed the men shooting at two girls; one was shot dead, the other was critically injured. “I heard shots, screams, pain,” says Vitak. ‘All emotions. I hope she is going to be fine.’ Vitak asserts it was too dark to see the suspects’ faces.”[1]

Mr. Vitak was one of many bystanders who saw two men carry out the shootings. “Multiple witnesses say they saw two people inside the suspect’s vehicle,” Santa Barbara television station KEYT reported.[2] Another source conveyed how Santa Barbara County Sheriff public information officer Kelly Hoover confirmed that a second suspect had been apprehended.[3] Still, during an early press conference Santa Barbara County Sheriff Bill Brown would neither confirm nor deny whether there was a second suspect, only “that there are multiple scenes and multiple victims and that the situation is fluid.”[4]

Initial reports also describe the event as a series of “drive-by shootings,”  including a documented instance of “hit and run … that left someone with major leg and head trauma.”[5] The Santa Barbara Independent also related “[a]necdotal yet unconfirmed reports” of bystanders “suggest[ing] that the vehicle involved was a black BMW with a passenger shooting a handgun.”[6]

Another witness identified as Sierra said “she was approached by two men in a black BMW. The driver flashed a small black handgun and asked ‘Hey, what’s up?’”[7] “Sierra” said at the time she believed it wasn’t a real gun and continued walking. “Seconds later, she could hear real bullets whistling past her. She managed to escape unharmed into a nearby home filled with strangers also seeking safety” RT.com reports.[8]

Perhaps in the midst of concerted activity and scant illumination multiple witnesses might of mistaken the number of individuals in a darkly-hued vehicle recklessly speeding by. Yet here is “Sierra”–a witness who claims to have encountered one of the assailants firsthand. One must therefore ask, Why, with such compelling witness accounts, has the ‘investigation’ been short-circuited in lieu of an arguably far less tenable, even sensationalistic storyline? Indeed, much like the estranged Adam Lanza, who similarly never lived to explain his motivations, the Elliot Rodgers motif closely aligns with gun control legislation and mental health protocols that powerful political interests are hell bent on achieving.

When this author contacted the Santa Barbara County Sheriff’s offices—Isla Vista’s law enforcement arm and the main agency involved in the inquiry—he was told that only those immediately involved in a crime may have access to an incident report, and with regard to the May 23 shooting such documentation would likely not be forthcoming even to those parties.

Initial witness recollections and those of press agent Hoover are corroborated in police dispatch audio, where officers are first cautious to enter into the immediate vicinity of the shootings. The crime scenes were ostensibly established within the jurisdiction of the Santa Barbara County Sheriff. Yet given the drastic circumstances it is difficult to imagine such parameters would be closely adhered to. In the captured audio an officer clearly states that “two suspects with gunshot wounds [are] in custody.”[9] Following the melee Hoover told the press that resources from throughout the county “were pouring into the neighborhood … to help with the investigation.”[10]

What adds further complexity to the case is that an elaborate “active shooter drill” involving multiple law enforcement agencies was scheduled to occur on May 28th at nearby Santa Barbara City College, where the alleged shooter was a student.[11] 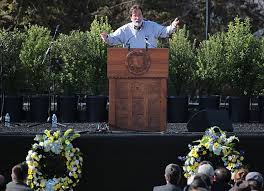 Regardless, in the aftermath of such an event the public is fed what appears to be a ready-made narrative complete with an unusually outspoken parent who, alongside those from the Sandy Hook School massacre, appear to use such events for furthering a specific political agenda. Richard Ross Martinez, father of one of the reportedly slain students, is a practicing attorney. One must therefore ask why he himself hasn’t looked at the available data and seriously questioned what appears to be a botched probe, or perhaps even a coverup.

In the end, journalism today is so perversely craven and devoid of originality that editors happily toss documented facts and testimony down the memory hole, particularly when they are confronted with a surge of official statements supporting yet another “lone nut” storyline.[12] Under ideal circumstances such pronouncements would be met with skepticism and rigorous scrutiny. One is left to ponder whether there would be any difference between the present propagandistic features of news if journalism were subsumed and directly operated by the state.

281 thought on “Unanswered Questions in the Isla Vista CA Shootings”