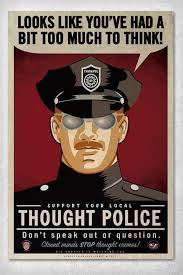 As its discourse suggests, this propaganda campaign is using the now familiar “conspiracy theory” label, as outlined in Central Intelligence Agency Document 1035-960, the 1967 memo laying out a strategy for CIA “media assets” to counter criticism of the Warren Commission and attack independent investigators of President John F. Kennedy’s assassination. At that time the targets included attorney Mark Lane and New Orleans District Attorney Jim Garrison, who were routinely defamed and lampooned in major US news outlets.

Declassified government documents have proven Lane and Garrison’s allegations of  CIA-involvement in the assassination largely accurate. Nevertheless, the prospect of being subject to the conspiracy theorist smear remains a potent weapon for intimidating authors, journalists, and scholars from interrogating complex events, policies, and other potentially controversial subject matter.

As the title of Newsweek‘s feature story indicates, a primary element of contemporary propaganda campaigns using the conspiracy theory/ist label is to suggest that citizens’ distrust of government imperatives and activities tends toward violent action. The “conspiracy theorist” term is intentionally conflated with “conspiracist,” thus linking the two in the mass mind. Images of Lee Harvey Oswald, Timothy McVeigh, and Osama bin Laden are subtly invoked when the magic terms are referenced. In reality, it is typically Western governments using their police or military who prove the foremost purveyors of violence and the threat of violence—both domestically and abroad.

In his Newsweek article, author and journalist Kurt Eichenwald selectively employs the assertions of the SPLC, Sunstein, and a handful of social scientists to postulate in Orwellian fashion that independent research and analysis of the United Nations’ Agenda 21, the anti-educational thrust of “Common Core,” the dangers of vaccine injury and water fluoridation, and September 11—all important policies and issues worthy of serious study and concern—are a “contagion” to the body politic.

In a functioning public, honest academics and journalists would uninhibitedly delve into these and similar problems–GMOs, state-sponsored terrorism, the dangers of non-ionizing radiation– particularly since such phenomena pose grave threats to both popular sovereignty and self determination. Such intellectuals would then provide important findings to foster vigorous public debate.

Absent this, segments of the populace still capable of critical thought are inclined to access and probe information that leads them to question bureaucratic edicts and, in some cases, suggest a potentially broader political agenda. In today’s world, however, such research projects carried out by the hoi polloi that are expressly reserved for government or foundation-funded technocrats “’distort the debate that is crucial to democracy,’” says Dartmouth political scientist Brendan Nyhan.

With the above in mind, a simple yet instructive exercise in illustrating the psycholinguistic feature of the conspiracy theory propaganda technique is to replace “conspiracy theories/ists” with the phrase, “independent research and analysis,” or “independent researchers.” Let us apply this to some passages from Eichenwald’s recent Newsweek piece.

“One of the most common ways of introducing  independent research and analysis is to ‘just ask questions’ about an official account,’’’ says Karen Douglas, co-editor of the British Journal of Social Psychology and a senior academic … at Britain’s University of Kent.”

In fact, substituting the phrases accordingly throughout the article significantly neutralizes its overall propagandistic effect.

Researchers agree; independent research and analysis are espoused by people at every level of society seeking ways of calming the chaos of life, sometimes by simply reinforcing convictions.

While the growth in the number of news outlets has helped spread independent research and analysis, it doesn’t compare to the impact of social media and the Internet, experts say.

“If you have social networks of people who are talking with one another, you can have independent research and analysis spread in a hurry,’’ says Cass Sunstein, a professor at Harvard Law School … “It literally is as if it was contagious.”

While some may dismiss independent researchers as ignorant or unstable, research has shown that to be false. “The idea that only dumb people believe this stuff is wrong,’’ says Dartmouth’s Nyhan.

People who more strongly believed in independent research and analysis were significantly less likely to use sunscreen or have an annual medical checkup.

According to a just-released report from the Southern Poverty Law Center, the independent research and analysis flowed in April at a hearing before Alabama’s Senate Education Committee about legislation to allow school districts to reject Common Core.

It’s true. Since September 11, 2001 the internet has increasingly allowed for everyday people to retrieve, study, and share information on important events and phenomena as never before. And as a recent study published in the prominent journal Frontiers of Psychology suggests, tendering “alternative conspiracy theories” to the government-endorsed explanations of September 11, 2001 is a sign of “individuation,” or psychological well being and contentment.

Such a condition is a clear danger to those who wish to wield uncontested political authority. Indeed, the capacity to freely disseminate and discuss knowledge of government malfeasance is the foremost counterbalance to tyranny. Since this ability cannot be readily confiscated or suppressed, it must be ridiculed, marginalized, even diagnosed as a psychiatric condition.

The recent abandonment of network neutrality may eventually further subdue the nuisance of independent research, thought, and analysis. Until then, the corporate media’s attempts to bamboozle and terrify the American public with the well-worn conspiracy theory meme will be a prevalent feature of what passes for news and commentary today.