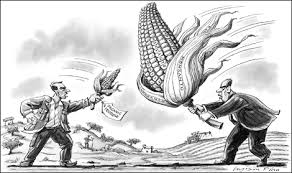 On March 15th France’s agriculture ministry banned the sale, use and cultivation of Monsanto’s MON 810 genetically modified (GM) maize, one of two varieties currently authorized by the European Union.

“The sale, use and cultivation of varieties of maize seed from the line of genetically modified maize MON 810 (…) is banned in the country until the adoption, on the one hand, of a final decision, and secondly, of (EU) community action, ” stated a decree issued on Saturday.

The French government asserts that GM crops present environmental risks, and has been seeking to ban GM corn after its highest court twice struck down previous measures.

The decision is intended to prevent any sowing of GM maize by farmers before a draft law is debated on April 10 aimed at prohibiting the planting of GMOs.

Annual sowing of maize in France gets under way in the second half of March.

The current Socialist government, like its conservative predecessor, opposes the growing of GMO crops because of public distrust of the technology and widescale protests from environmentalists.