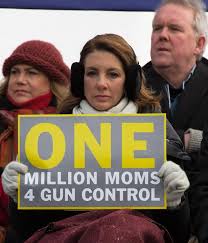 MDA joined Michael Bloomberg’s Mayors Against Illegal Guns (MAIG) on February 12th to issue a new joint study highlighting at least 44 school and college shootings since December 2012. With a total fatality count of 28, the report emphasizes how the tragic events have surpassed that of Newtown itself.

“We are a developed country,” Shannon declared in a fed-up tone upon the study’s release, “and we have to ask ourselves what is wrong with our culture and laws that’s creating an environment where not only do we have 44 school shootings in the past 14 months – but we are doing nothing about it.”[2]

Is it beyond reason to ask, “Who exactly is Shannon Watts?” This is a question major news media outlets have predictably left unexamined. Again, the 43-year-old is a self-styled “mother of five children,” a modest “stay-at-home mom in Zionsville, a suburb of Indianapolis, Indiana.” Watts is also portrayed in glitzy promos and has been wholeheartedly embraced by venues such as MSNBC as simply “a mom who demands action” to stop gun violence–the kind of gal who wants “sensible” gun laws, much like Boss Michael Bloomberg, President Obama, and many Congressional Democrats.

Yet Watts’ public persona was one she has only recently acquired. In fact, she has spent two decades quietly behind the scenes as an extremely ambitious executive at several major public relations firms and Fortune 500 companies. Watts’ Linked In profile indicates that she formally left the PR profession in June 2012, just six months before the Sandy Hook event.

At that time Watts headed up her own “boutique” firm, VoxPop Public Relations, while working as a freelance consultant for clients of public relations behemoth Fleishman-Hillard. Watts began VoxPop in 2008, the same year she was recognized by the foremost public relations trade journal, PR Week, as one of its “40 Under 40,” for notable achievements and future promise in the industry.

Overall, Shannon Watts, who until only recently went by the last name Troughton, began work fresh out of University of Missouri in 1993 as a public affairs officer for Missouri Governor Mel Carnahan, the Missouri House of Representatives, and the Missouri Department of Economic Development.

In 1998 Watts (Troughton) moved on to further develop her propaganda acumen as Vice President of Corporate and Public Affairs at the major PR firm Fleishman-Hillard, where she remained until 2001. Watts then became Director of Global and Public Affairs at the Monsanto Corporation “where she led external initiatives designed to generate positive, proactive media coverage of the company’s agriculture biotechnology products.”[3]

Between 2004 and 2006 Watts served as Director of Global Communications for GE Healthcare, General Electric’s $15 billion medical and diagnostics device unit. She then joined WellPoint, the nation’s largest health insurance corporation, as its Vice President of Corporate Communications.

At WellPoint Watts oversaw an impressive “30-person corporate communications team” until 2008, when she stepped down to begin VoxPop Public Relations. Watts “started the firm because she saw a need for boutique agencies that can provide the same service at a lower cost during the recession,” PR Week observes.[4]

In other words, as a very highly-positioned and well-connected public relations maestro, Watts is an especially apt individual to head up MDA—perhaps too apt. Given her talents (that systematically go without mention in news stories) it is perhaps unsurprising that Watts has been embraced by corporate news media outlets that strongly back heightened gun control measures and routinely cite Sandy Hook as a transformative event in this regard.

For example, here’s Shannon playing reluctant protester at the January 2013 “March on Washington for Gun Control.” “I am not a politician. I am a mom from Indiana,” Watts declares. “I am an accidental activist.”

Here’s Shannon on MSNBC, where she is introduced not as a professional flack, but simply as the “Founder” of MDA and “Mother of Five Kids.”

More recently Shannon has appeared on MSNBC’s “The Ed Show,” where she provides her account of being accosted by a motley pack of “gun bullies” while on a simple coffee date with like-minded moms. Asked by host Ed Shultz whether she had previously been an activist, Watts responds, “Never in my entire life. I became an accidental activist on, uh, December 15, 2012, after Sandy Hook–the day after–and I will never go back …”

Watts has also become a de-facto columnist for the Huffington Post, having written nine opinion pieces since January 2013—about one every six weeks—as the “stay at home mom” and former “communications executive” who has finally found her cause.[5] One piece appearing on Mother’s Day, “Keep Your Flowers on Mothers Day, I want My Rights,” predictably trotted out Sandy Hook as a rallying cry. “Twenty children and six adults had been slaughtered in the sanctity of an elementary school by an assault weapon designed for the battlefield,” Watts tells HuffPo readers.

The horror of it was almost too much to believe or comprehend. This has to be the tipping point, I thought. This has to be what moved us as a country to change. But it wasn’t. Twenty dead first-graders weren’t enough to advance even the weakest of legislative measures.[6]

Here is yet another especially unusual development closely related to the Sandy Hook massacre. In this instance a highly experienced public relations practitioner apparently quits a very promising career, then just months later happens to start up a prominent non-profit activist organization that echoes the voices of Newtown parents–the day following the incident itself. The organization is also now closely aligned with Bloomberg’s MAIG, a group that similarly clings to Sandy Hook, and will thus have more than ample resources going forward.

Over the past year MDA has generated publicity by pressuring retail chains Starbucks and Staples to issue policies preventing their law-abiding customers from possessing weapons inside their stores. It will soon be embarking on a campaign against McDonald’s to enact similar measures.[7]

As an expert PR practitioner Shannon Watts appears to have a great deal in common not only with Sandy Hook’s central players, but also the classic engineers of mass consent. By combining her personal identity and professional forte toward furthering a broader narrative intended to refashion public understanding and will, Watts demonstrates the greatest of moral forfeitures so common to modern governance–specifically, inducing a credulous constituency toward the false notion that a statist monopoly over killing technology will somehow achieve more secure communities and public spaces. History suggests such a concentration of power brings about quite the opposite.

Republished at GlobalResearch.ca on February 21, 2014,

93 thought on “Just Another “Accidental” Activist”