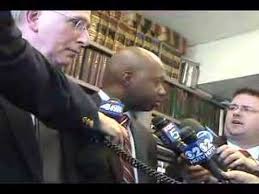 Whenever the reclusive Peter Lanza wants to make a public statement concerning the Sandy Hook School massacre purportedly carried out by his son Adam Lanza, the press is contacted by Lanza’s “spokesman,” one Errol Cockfield Jr.

Lanza has thus been able to maintain his remarkable Howard Hughes-like withdrawal from the packs of reporters that would readily clamor for a brief interview with or even a snapshot of the reclusive dad. Since December 2012 virtually all of Lanza’s communications have gone through this man with strong ties to intransigent Democratic Party officials who’ve one way or another fallen from grace.

Who exactly is Errol Cockfield Jr.? “I am the day-to-day lead on what’s called crisis and issues management,” Cockfield explains.

So what I do is for large companies and organizations and universities is that when they have things that could become a media issue or have become a media issue, I lead a team of folks who help advise them and help them prepare to deal with those issues. For instance, Penn State has been a client of mine [and] General Electric is a client of mine. Companies like that.[1]

Cockfield’s services are most recently observed in early January 2014 when he made an announcement to the Hartford Courant on behalf of Lanza. “A statement released by Lanza’s spokesman, Errol Cockfield, said, ’As Mr. Lanza has informed law enforcement officials throughout this process, he is willing to approve the release of any [of Adam Lanza’s] medical records that he has the authority to release.’” The Courant failed to explain that Cockfield is not only a public relations expert, but once worked at the Courant as a reporter.[2]

Mr. Cockfield is a Guyanan-born journalist and former top New York Democratic Party staffer-turned-Vice President of Crisis and Risk Management for public relations firm Edelman. According to the trade publication PR Week, Edelman is the world’s largest public relations firm, with 66 offices and more than 4,500 employees worldwide, as well as affiliates in more than 30 cities.”[3] Operating out of the company’s New York office, Cockfield appeared to be assigned to the Lanza case roughly one week after the December 14, 2012 incident.

The Washington Post reported on Edelman’s relationship with the Lanza family after the paper questioned a New York Post story quoting a Facebook interview that was allegedly conducted with Adam Lanza’s brother Ryan.[4] On December 23, 2012 Cockfield came forward to correct the story, arguing on the Lanzas’ behalf that the interview was “a complete hoax” conducted between the New York Post and a third party who set up a Facebook account using Ryan Lanza’s name.[5]

Yet how is it that the Lanza family, during a domestic crisis of such magnitude, would see fit to retain the world’s largest public relations firm to correct a single sensationalized report of a faux interview published by an organ well-known for, well, its sensationalism? Are there more powerful parties involved seeking to manage the message, and perhaps Peter Lanza as well? Is Cockfield providing his services as a personal favor to Lanza? Or is he working as an employe of Edelmen? News stories, including published statements from Cockfield on behalf of Lanza, don’t exactly say. “The scope of work that the PR firm is providing to the Lanza family is unclear,” PR Week observes, “as well as whether it is charging for its services.” Cockfield would not return calls from the magazine for comment.[6]

Errol Cockfield Jr. was born in 1973 in the rural outskirts of Georgetown, Guyana. At age nine he moved to Trinidad, and shortly thereafter to the United States. Cockfield is a 1994 graduate of the State University of New York at Stony Brook, holding a bachelor’s degree in English. Following college Cockfield worked as a reporter for the Tribune Company’s Los Angeles Times, the Hartford Courant, then Long Island’s Newsday. In Los Angeles he reported on a series of random white skinhead attacks on blacks that led to an investigation by county officials.

At Newsday he was assigned as City Economic Development Reporter and the Nassau County Political Reporter. In these posts he covered the rebuilding of the World Trade Center in the wake of September 11, 2001. The young journalist also wrote on a controversial plan to build a taxpayer-financed football stadium in Manhattan.[7] In addition to some freelance writing on hip-hop artists for Vibe and The Source, Cockfield then worked out of Newsday’s Albany bureau.

The prominent journalist then segued into Democratic state politics in 2007 with the help of now-disgraced New York Governor Elliot Spitzer. Spitzer appointed Cockfield Press Secretary of the Empire State Development Corporation with an annual salary of $150,000.[8] Shortly thereafter in the midst of the Spitzer administration’s political surveillance controversy (also known as “Troopergate”) the embattled governor elevated Cockfield to Press Secretary, where he reported directly to Spitzer and his Communications Director. At this time Cockfield was recognized by New York’s political journal City & State as one of the region’s “rising stars” under the age of 40.[9]

Cockfield managed communications during the difficult transition of Democratic power from Spitzer to his Lieutenant Governor David Paterson. He continued as chief spokesman and adviser to Paterson, whose administration continued to be embroiled in controversy. In 2010 Paterson discontinued his bid for a full term as rumors ensued concerning alleged extramarital affairs and drug use.[10] Here Mr. Cockfield can be seen at work defending Paterson against one of the governor’s many suspected fiscal improprieties.

In April 2013 federal charges were brought against Sampson for embezzling $440,000 and financing an attempt to secure one of the most powerful posts in city politics—Brooklyn district attorney. Citing a record of corruption that dated to at least 2009, the indictment claimed Sampson even told an associate he could locate informants and “take them out.” A US attorney called the case “one of the most extreme examples of hubris and arrogance we have ever seen.” Sampson was charged with embezzlement, obstruction of justice, lying to FBI agents, and witness and evidence tampering. He pled not guilty to the charges.[12]

In October 2013 federal authorities charged one of Sampson’s chief aides, Melvin Lowe, with fraud and tax evasion – including charges he defrauded the New York Democratic Senatorial Campaign Committee out of $100,000, and neglected to report over $2 million in consulting fees on his income tax returns.[13]

In late 2011 Cockfield was promoted to Sampson’s Chief of Staff with a salary of $140,000. But he unexpectedly stepped down less than one year later, in August 2012, to make the move to Edelman. “The timing of his departure raised eyebrows,” the Daily News noted, especially because the election deciding the fate of the Democratic majority was just three months away.[14]

And now for over one year Cockfield remains the official spokesperson for Peter Lanza, a man who has not had contact with the press since December 14, 2012.[15] The journalistic outlets reporting Cockfield’s pronouncements are more than likely aware that he is the Crisis and Issues Management director of the influential Edelman public relations firm, in addition to having an unsavory set of past associations with corrupt politicking. Why, then, do they maintain the pretense that he is merely an impartial (and politically isolated) agent of the Lanza family? Failing to do so clearly implicates such news media in actively perpetuating what more and more appears to be the Sandy Hook deception.