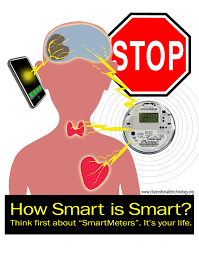 Major power utilities continue to deploy “smart” electrical meters on businesses and private residences throughout the United States and Canada. Yet those in North America and elsewhere remain in the dark on the negative health effects of such devices that systematically blast their homes with radio-frequency (RF) radiation on a minute-by-minute, round-the-clock basis.

In 2009 the Obama administration partnered with utilities by allocating $3.4 billion in federal stimulus funds toward building a nationwide “smart grid,” where smart meters figure centrally.[1] The project is part of President Obama’s “Climate Action Plan” that under United Nations auspices seeks to reduce US carbon emissions 20% by the year 2020.[2]

There is more than ample research available that has associated negative health effects of RF radiation emitted by smart meters [3] for regulatory authorities to place restrictions on power utilities and compel them to abide by the precautionary principle. Such restrictions would require power providers to refrain from wide scale installation of smart meters until a sufficient body of scientific research demonstrating the safety of such devices has been produced and rigorously evaluated.

Yet in the US and elsewhere the imperative of having a “smart grid,” the prospect of a carbon trading scheme, lax (and in at least some cases corrupt) state and federal regulatory bodies, and the sheer power of the utilities combine to jeopardize the long term health of the entire population.

In a purportedly democratic society news outlets play a decisive role in such an impending health crisis. By failing to report on the dubious health research of smart meters and the fact that the public is being involuntarily subjected to such technology, news media are a key factor in the citizenry’s continued ignorance and inaction.

In May 2011 the World Health Organization’s International Agency for Research on Cancer categorized “radiofrequency electromagnetic fields as possibly carcinogenic to humans based on an increased risk for glioma, a malignant type of brain cancer, associated with wireless cellphone use.”[4] Despite this warning from a well-recognized source, the utilities stubbornly insist that all residences must be equipped with a smart meter issuing dangerous electropollution.

The Environmental Protection Agency (EPA) ceased studying the health effects of radiofrequency radiation when the Senate Appropriations Committee cut the department’s funding and forbade it from further research into the area.[5] Thereafter RF limits were codified as mere “guidelines” based on the EPA’s tentative findings and are presently overseen by the Federal Communications Commission (FCC).

These weakly enforced standards are predicated on the alleged “thermal effect” of RF to which the FCC subscribes. In other words, if the energy emitted from a wireless antenna or device is not powerful enough to heat the skin or flesh then no danger is posed to human health.[6]

To this day power utilities cling to this severely outmoded and unscientific standard when confronted with the formidable body of research linking RF to cancer, destruction of DNA, and other negative health effects. News media seldom question the FCC policy when it is cited by utilities and regulators alike to underline the supposed overall safety of smart meters.[7]

An electronic LexisNexis search of newspaper articles referencing “smart meters” appearing between May 31, 2011, the date WHO classified RF a Class 2B carcinogen, and June 19, 2014, yields close to 839 pieces published in English language papers. Yet for the same time span only one tenth of the sample (82 articles) mentions “smart meters” and “carcinogen” or “carcinogenic” in the same report. Of these, 65 of the articles appeared in Canadian, and to a much lesser degree Australian or UK papers. Note that each sample includes guest editorials and letters to the editor penned by concerned citizens.

Using parameters from the date May 31, 2011, the date WHO declared RF a Class 2B carcinogen, to January 19, 2014, of 93 newspaper articles referencing “smart meter” and “World Health Organization,” 76 were published in Canadian, and to a much lesser degree UK, Australian, Malaysian or New Zealand outlets.

As the above suggests, the extremely limited awareness especially in the US of the potential health consequences of exposure to the continual RF emitted by smart meters is primarily because the issue is being blacked out in the press. When such dangers are reported, they are tempered by the refrain of the FCC’s “thermal effect” policy, which in light of the abundant countervailing research amounts to disinformation.

In December 2013 I contacted the reporter at the local metro-daily Palm Beach Post covering the state power utility, Florida Power and Light, and its smart meter policy to remind her of the bevy of public health and medical research documenting the likely consequences of sustained RF exposure. I also directed her to the WHO statement classifying RF as potentially carcinogenic.

To the Post’s credit a subsequent story highlighting Florida Power and Light’s “opt out” policy referenced the WHO statement. Yet the piece appeared deep in the business section of the paper, and the WHO warning was accompanied by the Florida Public Service Commission’s familiar rejoinder.

In 2011 the World Health Organization’s International Agency for Research on Cancer classified radio frequency electromagnetic fields such as those emitted by cellular phones, microwaves and smart meters as possibly carcinogenic to humans.

The PSC has said its authority does not extend to health issues related to meters. Smart meters are certified for compliance with radio frequency emission standards by the Federal Communications Commission, and the FCC has deemed that meters in compliance with the standards do not have adverse health impacts.[8]

While one or more hidden agendas likely exist to keep the public unaware of the health dangers associated with RF and smart meters (again, think carbon trading, in addition to the social control possibilities via energy rationing and surveillance soon to be realized through the “smart grid,”) a more immediate cause for such censorship is simply profit and continued media monopoly control of public opinion and discourse.

The telecommunications industry whose services are largely predicated on RF has recently exhibited the largest growth in advertising outlays, which are surely recognized in bottom line terms by the news and media industries.[9] With potential continued revenue growth on this scale, raising questions and relaying information that can safeguard public health and allow citizens to ask intelligent questions concerning the health of themselves and their loved ones simply constitutes poor business practice.

[7] When this author obtained documents through a public records request from the Florida Public Service Commission on Florida Power and Light’s smart meter campaign–a very simple and routine endeavor for any journalist–it was evident that no human health impact studies on statewide smart meter deployment were ever considered. The PSC merely accepted FPL’s rationale and related public relations literature.

Republished at GlobalResearch.ca on January 21, 2014.