The Magnificent Achievements of Eco-Propaganda

Today a good deal of what qualifies as propaganda is much more subtle than overt. When an entire civilization or way of life is to be significantly altered the tried-and-true method of “repeating a lie until it becomes truth” needs to be done over a period of many years and in a multitude of varying ways to take hold and change the very assumptions and beliefs of a people.

This process is especially vital for reaching a given society’s more elite demographic—the opinion leaders who perceive themselves as “smarter than the average bear” and thus impervious to simple appeals and indoctrination.

A case in point is the agenda backed by powerful global elites and recognizable under names such as “climate change” and “sustainability.” The United Nations Intergovernmental Panel on Climate Change’s Fifth Assessment Report, released on September 27, 2013, came replete with an assemblage of legitimizing features along these lines (“scientific,” “scholarly,” “authoritative,” “peer reviewed,”). Also termed the “Climate Bible,” journalists and policymakers alike regard it as “authoritative” and “the gold standard” of climate science. The public is told that the official body’s findings are now clearer than ever: “human influence has been the dominant cause of the observed warming since the mid-20th century.”[1]

Among the most vociferous agitators for the IPCC’s climate change orthodoxy are the foundation-funded, tax-exempt, progressive-left media that sit alongside the bevy of similarly tax-exempt, foundation-funded environmental organizations that together uphold and publicize the theory of CO2-based anthropogenic (human-caused) climate change (ACC).[2] Self-professed as “independent,” “investigative,” even “educational,” the so-called “alternative media” turn a blind eye to seriously scrutinizing the highly questionable IPCC’s “scientific” review of the climatological literature and its implications for the array of ambitious programs and policies stealthily introduced throughout the industrialized world, many of which are seldom subject to popular plebiscite. Think “smart grid” and “smart growth.”

Logical questions from such apparently independent organs might include, “How does the IPCC produce its findings?” and “Who benefits?” Instead, there is an almost knee-jerk response on behalf of progressive-left editors and readerships to trust and support the UN group’s purportedly objective and meticulous review of the peer-reviewed climatological literature. 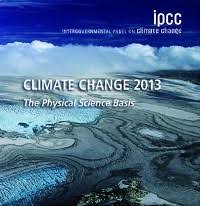 Uncritical advocacy of the IPCC’s anthropogenic (human-caused) global warming extended beyond headlines to media criticism. In December, for example, the progressive Fairness and Accuracy in Reporting (FAIR) observed that corporate controlled network newscasts routinely failed to link “extreme weather” to “global warming.” “In the first nine months of 2013,” FAIR observes,

there were 450 segments of 200 words or more that covered extreme weather: flooding, forest fires, tornadoes, blizzards, hurricanes and heat waves. But of that total, just a tiny fraction–16 segments, or 4 percent of the total–so much as mentioned the words “climate change,” “global warming” or “greenhouse gases.[3]

What is left unmentioned is that fact that all of these “extreme weather” incidents have one common denominator that FAIR and corporate and progressive media alike consistently overlook: the sun. As University of Winnipeg climatologist Dr. Tim Ball explains (here at 35:00), the IPCC’s “terms of reference” through which the body proceeds to generate its findings exclude the sun and its many demonstrable atmospheric effects as factors in the warming and cooling of the earth’s climate.[4] It is thus no wonder that at best fringe or nonexistent causes of “climate change”–such as minuscule alterations in atmospheric gases–are pointed to with great alarm by the IPCC and its proponents.

Despite far more unambiguous and compelling scientific explanations the notion that “carbon emissions” are the foremost cause of natural climactic events has become something of a religion, and this is especially the case on the progressive-left, where adherents mechanically accept the curious agenda and its ostensibly “scientific” basis while vehemently condemning non-believers as “climate deniers.”

As Canadian journalist Donna LaFramboise has documented in her important 2011 exposé, the IPCC’s scholarly personnel is in fact heavily weighted toward what are often third-or-fourth-rate scientific talent whose eco-political stances are strictly in accord with the IPCC’s “research” agenda pushing anthropogenic climate change. IPCC authors often include climatology graduate students and even environmental activists from organizations such as Greenpeace and the World Wildlife Fund—indeed, figures with little-if-any scientific training but with clear agendas to promote.

LaFramboise further found that one third of the literature reviewed and cited by the IPCC in its 2007 report was–contrary to IPCC chief publicist Ragendra Pachauri’s pronouncements–not even peer-reviewed, and in many cases included citations of promotional literature devised and distributed by environmental activist organizations.

These unethical and compromising relationships are not difficult to explain if one is to recognize the IPCC for what it in fact is—a powerful political organization with the overarching objective of manufacturing consent and achieving transnational policy harmonization around the largely discursive construct of anthropogenic carbon-centric climate change.

The fact that the IPCC is capable of forthrightly carrying out one of the greatest scientific frauds in human history, setting long range governmental policies while enlisting allegedly intellectual sophisticates and “progressive” news media as its most devoted foot soldiers, is no small-scale feat. It is, rather, an immense achievement in modern propaganda and thought control that only hints at the powerful forces behind a much more far-reaching agenda.

[1] Intergovernmental Panel on Climate Change, “Human Influence on Climate Clear: IPCC Says,” Geneva Switzerland: World Meteorological Organization. The notion of “a 97% consensus” has itself become a common mantra for climate change fear mongering and grounds for labeling someone a “climate denier.” Yet there is limited evidence of any such consensus concerning ACC among climatologists. The oft-cited 2009 American Geophysical Union survey alleging a 98% consensus among scientists on ACC cannot sustain even modest scrutiny. See Larry Bell, “That Scientific Global Warming Consensus … Not!” Forbes.com, July 7, 2012, and “Global Warming Consensus Looking More Like a Myth,” Investors Business Daily, February 15, 2013. Another study held up as “proof” of scientific consensus, “Expert Credibility in Climate Change,” asserts only carefully qualified claims along these lines. “A broad analysis of the climate scientist community itself,” the authors point out, “the distribution of credibility of dissenting researchers relative to agreeing researchers, and the level of agreement among top climate experts has not been conducted and would inform future ACC discussions.” The brief paper assesses “an extensive data set of 1,372 climate researchers” to conclude that the scientific expertise and prominence of those who accept the IPCC’s ACC tenets surpass those who remain “unconvinced.” This begs the question, To what degree are the requisites of foundation funding related to espousing IPCC/ACC opinion? William R. L. Anderegg, James W. Prall, Jacob Harold, and Stephen H. Schneider, “Expert Credibility in Climate Change,” Proceedings of the National Academy of Sciences of the United States of America, 2010.

[3] “TV News and Extreme Weather: Don’t Mention Climate Change,” Fairness and Accuracy in Reporting, December 18, 2013. It might be added that corporate media and progressive-left counterparts uniformly fail to consider other possible causes of such unusual weather events, such as geoengineering and similar “environmental modification techniques” acknowledged by the US military and undertaken in many industrialized countries. See, for example, Michel Chossudovsky, “Climate Change, Geoengineering, and Environmental Modification Techniques,” Global Research, November 24, 2013.

Republished at GlobalResearch.ca on January 31, 2014.

132 thought on “The Magnificent Achievements of Eco-Propaganda”