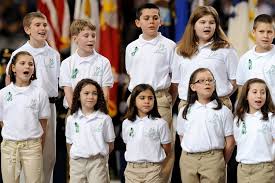 The words might be more fitting as a banner on the National Enquirer. Yet according to this brief (2:33) video, several of the first graders slain in Newtown Connecticut on December 14, 2012 are not only alive and well, but rather famously performing “America the Beautiful” at Super Bowl XLVII.

The unlikely performers stand alongside Grammy Award-winning vocalist Jennifer Hudson and … their own siblings? The clip draws on select photographic evidence to make its case.

In fact, none of the children actually booked to perform in New Orleans on the evening of February 3, 2013 were identified by the event’s organizers, the argument being that if they remained anonymous they might better represent “Newtown children,” a press report observes.