Land of the Docile and Unfree 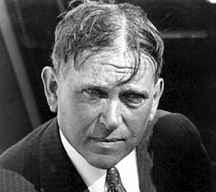 The American of today, in fact, probably enjoys less personal liberty than any other man of Christendom, and even his political liberty is fast succumbing to the new dogma that certain theories of government are virtuous and lawful, and others abhorrent and felonious. Laws limiting the radius of his free activity multiply year by year: It is now practically impossible for him to exhibit anything describable as genuine individuality, either in action or in thought, without running afoul of some harsh and unintelligible penalty.

It would surprise no impartial observer if the motto “In God we trust” were one day expunged from the coins of the republic by the Junkers at Washington, and the far more appropriate word, “verboten,” substituted. Nor would it astound any save the most romantic if, at the same time, the goddess of liberty were taken off the silver dollars to make room for a bas-relief of a policeman in a spiked helmet.

Moreover, this gradual (and, of late, rapidly progressive) decay of freedom goes almost without challenge; the American has grown so accustomed to the denial of his constitutional rights and to the minute regulation of his conduct by swarms of spies, letter-openers, informers and agents provocateurs that he no longer makes any serious protest.

It is surely a significant fact that, in the face of the late almost incredible proceedings under the so-called Espionage Act and other such laws, the only objections heard of came either from the persons directly affected—nine-tenths of them Socialists, pacifists, or citizens accused of German sympathies, and hence without any rights whatever in American law and equity—or from a small group of professional libertarians, chiefly naturalized aliens.

The American people, as a people, acquiesced docilely in all these tyrannies, both during the war and after the war, just as they acquiesced in the invasion of their common rights by the Prohibition Amendment. Worse, they not only acquiesced docilely; they approved actively; they were quite as hotly against the few protestants as they were against the original victims, and gave their hearty approbation to every proposal that the former be punished too.

The really startling phenomenon of the war, indeed, was not the grotesque abolition of liberty in the name of liberty, but the failure of that usurpation to arouse anything approaching public indignation. It is impossible to imagine the men of Jackson’s army or even of Grant’s army submitting to any such absolutism without a furious struggle, but in these latter days it is viewed with the utmost complacency.

The descendants of the Americans who punished John Adams so melodramatically for the Alien and Seditions Acts of 1789 failed to raise a voice against the far more drastic legislation of 1917. What is more, they failed to raise a voice against its execution upon the innocent as well as upon the guilty, in gross violation of the most elemental principles of justice and rules of law.

From The American Credo: A Contribution toward the Interpretation of the National Mind (1920)

61 thought on “Land of the Docile and Unfree”