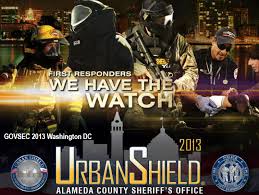 The following guide to the 2013 Urban Shield training exercise organized by the Alameda County Sheriff’s Office was obtained by members of Occupy Oakland.

From the Exercise Program:
The Urban Shield exercise begins at 0500 hours (October 26, 2013) and will run continuously for approximately 48 hours.

During this time local and state federal and international agencies will train together to ensure that we are prepared to respond to any mutual aid crisis.

FOR ROUTINE POLICE WORK. THEY ARE READY FOR ANYTHING AT THIS POINT. THEY KNOW THAT THE SUSPECT OUT THERE HAS SHOT AN OFFICER. IT IS CAPABLE OF THAT THAT SHE THE SUSPECT — THE SUSPECT IS CAPABLE OF THAT KIND OF VIOLENCE. LET’S GO TO LIVE COPTER THREE. THERE ARE SO MANY AREAS THAT YOU WANT TO TRY AND CAPTURE FOR US AS A PHOTOGRAPHER. WHAT ARE YOU SEEING? I SEE A LOT OF POLICE OFFICERS COMING TOGETHER. I HAVE NEVER SEEN THAT BEFORE, MARCHING DOWN THE STREET IN A LINE (like) THAT. THAT WAS A FIRST FOR ME, AND I HAVE BEEN DOING THIS FOR A LONG TIME. LOTS OF AIRCRAFT APPEAR. THE CHP HAS THERE CHOPPED OR UP AS WELL — CHOPPER UP AS WELL. THE ROADS ARE BLOCKED OFF ON THE CORNER THERE. I DON’T WANT TO GIVE AWAY POSITION, BUT THEY DO HAVE…

Strategy of Tension / State of Siege

Mass Traumatization and the Body Politic