This Global War on Terror is a Big Fraud! 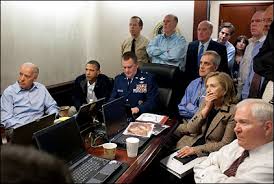 The observations captured here emerged in preparation for a September 13 interview on Iran’s Press TV.

It is now becoming increasingly clear to the broader public that the so-called “War on Terror”–the latest chapter of which involves destabilization and proposed military action against Syria–constitutes a twelve-year-old effort to wage never-ending war abroad while maintaining a massive psychological warfare campaign on the citizenry back home.

Ever since September 11, 2001 the US public has been misinformed and terrorized by their own government into believing that fanatical Muslim terrorists comprising “Al Qaeda” are out to get them. In reality Al Qaeda is an established component of US and Western intelligence, and thus the “War on Terror” is a colossal fraud that in many important ways has only intensified under the Obama administration.

19 thought on “This Global War on Terror is a Big Fraud!”