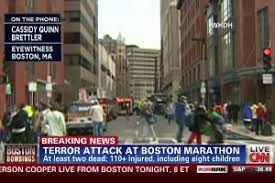 Quinn Brettler then provides a detailed description of the event as it unfolded. “So I—like you said was about 30 feet from the finish line,” Quinn Brettler explains.

I—mainly I heard it and I felt it. I heard—you guys are showing video of it—I heard a noise that I’ve never heard anything as loud as that in my entire life and I felt the ground shake like nothing ever before [sic]. I mean my legs were shaking for two hours after because I was just so sh[a]ken up literally. [Note that Quinn Brettler’s interview is taking place approximately 90 minutes after the incident. Along these lines, how did CNN and other networks locate the interviewee so quickly? Cellphone service is severely congested or reportedly down in the bombing aftermath.-JT] And then about 25 seconds later I realize I should turn and see what was actually happening and look at what happened besides just run away. So I looked up and just saw smoke everywhere, and everybody screaming and running in different directions and just utter chaos [sic].

Burnett then prompts Quinn Brettler to discuss the carnage she says she has witnessed. “You were 30 feet away … you must have seen people who were injured or worse at that moment.” “I didn’t know where to go,” responds Quinn Brettler,

and people were just screaming and running in different directions so I went into a little ATM booth that was close by ‘cause everyone seemed to be going inside for safety. Ah—so I went inside there and from the window I—from there I saw people being carried past me that were in—I mean I was fine but these people were in much worse shape than I am, obviously. Uhm, and just blood everywhere. Body parts that should never look in the state they were looking. Just total—I mean disturbing [sic].

The following morning at 9:38AM Quinn Brettler is interviewed on camera in Boston by CNN reporter Chris Cuomo.

In this interview she describes herself as a “video blogger,” and in stark contrast to the exchange with Burnett, Quinn Brettler makes no reference to being at the Marathon to see an acquaintance cross the finish line. Instead she goes on at some length describing how she videotaped the aftermath. “You had a camera on ya?” Cuomo asks. “I did,” Quinn Brettler responds.

I had a—I had a DSLR and [I] also had a—just my phone camera—that’s my HD camera and I’m a video blogger so I figured if I—I’m alive—there are other people that are a lot less fortunate [who] are not alive, or are injured, or are heading to the hospital right now. So if I’m here I might as well at least try to show people in other places what’s—what’s going on and post the video as quickly as I can because you can’t understand it unless you’re actually there.

Cuomo then asks, “What was the look for your lens? What kinds of things did you actually see?”

Ah, as I was walking and taking video I walked past a res—restaurant on Newbury Street that I saw was giving out pitchers of water to people so I looked down and there was actually a person who was bleeding on—on the street right off of the sidewalk. Just laying down, and luckily this restaurant was helping them. And it was great to see people teaming up together to help the people that were in need. But I mean everyone around me, no one knew what to do and it was just—that’s basically what I captured on video. It was just utter chaos.

Quinn Brettler’s responses are especially intriguing in light of the immediate locale and police procedures applied at the scene. Newbury Street is over two city blocks (673 feet according to Google Maps) away from the finish line area where the dead and wounded lay. As described below, Quinn Brettler also films herself further down Boylston Street at the scene of the second bombing. She is thus allowed to freely roam around a broad area in the immediate wake of the largest terrorist attack since 9/11. This greatly contrasts with how other pedestrians are treated. As one college student in roughly the same location recalls, “We were being told to sit against the wall and just sit there and wait for further instructions.”

So there are clear inconsistencies with the two accounts offered to Burnett and Cuomo. But more importantly CNN fails to explain that Cassidy Quinn Brettler isn’t just a run of the mill bystander or amateur videographer, but rather a professionally-trained freelance reporter and actor.

Quinn Brettler is a 2011 graduate of Emerson College in Boston with a double major in Broadcast Journalism and Theater Studies with a Performance emphasis. According to her website’s moniker, Quinn Brettler is “all over the internet, in front of the camera.” She presently holds the position of Director of Digital Creative & Social Media at Boloco, a moderately-sized New England restaurant franchise. Quinn Brettler otherwise attends to “tweeting, instagramming, facebooking, and traveling the globe shooting/hosting/producing/editing YouTube videos” for her employer, as well as videos for her own YouTube channel.

Here Quinn Brettler may be found discussing the wonders of green screen special effects. “You can be invisible,” she effuses. 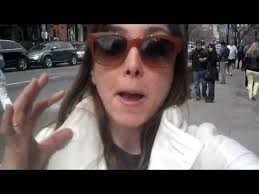 Also on Quinn Brettler’s site is a special page devoted to her coverage in the press, with dozens of mentions from major news media highlighting her activity in broadcasting, theater, dance, and related pursuits. Perhaps sensing the ethical and more serious concerns suggested here, there is no mention of the back-to-back cameos on CNN, a cable network with profound influence and reach. Nor is there any reference to the appearances on her blog.

Yet on a corollary YouTube channel Quinn Brettler posts “before and after (the blast)” videos of the event which are stand alone artifacts that demand further independent analysis not possible within the scope of this post.

In the second video, inconspicuously titled, “BOSTON MARATHON EXPLOSIONS!” Quinn Brettler is meandering around the location of the second blast, which is 500 feet or more from her 30-to-50 feet proximity to the first explosion. And, in contrast to her interview with CNN’s Burnett, Quinn Brettler claims to have heard the second explosion–that detonated a mere ten seconds after the first–while sheltering in an ATM alcove.

Then curiously Quinn Brettler states, “I guess I should walk back to work.” This conflicts with her remark in the before-explosions video that Bostonians have Patriots’ Day off, and how she anticipates seeing the CFO of Boloco, who apparently is the Marathon participant CNN’s Burnett mentions in the April 15 interview. (On a related note, as one observer has pointed out, throughout the latter video purportedly shot 10 minutes after the attack, few sirens or similar emergency activity activity can be heard in the background, which is markedly unusual following an event of such magnitude.

The bottom line is that the various contradictions in Quinn Brettler’s accounts of the Boston bombings–and CNN’s use of her as an impartial witness–are suspect. This individual is a public figure of some stature who was almost certainly known to CNN’s producers before the interviews took place. (A Google search on her name yields 147,000 results.) Using a person with such capacities with the intent to mislead would be well within the parameters of the cable news industry’s achievements in chicanery and deception.

This is particularly the case with CNN. From its promotion and coverage of wars abroad to acts of domestic terrorism, the outlet has a well-documented history of hoodwinking the public on matters of major import. Overall, utilizing a professional broadcaster and actor as an eyewitness to an ostensibly tragic and horrific event further calls into question the veracity of the mainstream reportage on the bombing and its equally portentous fallout.