The Paranoid Style of American Governance 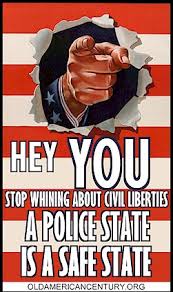 This article was originally posted at Memory Hole Blog and Global Research.ca on June 2, 2012.-JFT

In 1964 Harper‘s magazine published the now famous essay, “The Paranoid Style of American Politics,” by historian and public intellectual Richard Hofstadter. Appearing in the wake of President John F. Kennedy’s assassination and Arizona Senator Barry Goldwater’s Republican presidential nomination, the tract remains emblematic of liberal anxiety toward serious and in many cases unresolved questions regarding the forces behind American governance. “The Paranoid Style” overall helped establish the term “conspiracy theory” as likely the most powerful epithet in the American political lexicon.  “American politics has often been an arena for angry minds,” Hofstadter wrote.

“In recent years, we have seen angry minds at work, mainly among extreme right-wingers, who have now demonstrated, in the Goldwater movement, how much political leverage can be got out of the animosities and passions of a small minority. But, behind this, I believe, there is a style of mind that is far from new, and that is not necessarily right-wing. I call it the paranoid style, simply because no other word adequately evokes the sense of heated exaggeration, suspiciousness, and conspiratorial fantasy that I have in mind.” (emphasis added)

Americans typically comfort themselves in the notion that they live in a democracy, with a government that is rational, responsible, and accommodative of their needs. Yet what if the government Americans look to for protection of personal property, the creation and enforcement of fair and just laws, and defense of the nation’s borders and interests abroad exhibits the paranoia Hofstadter attributed to John Birchers and Goldwater supporters, complete with deep suspicions and conspiratorial fantasies toward those it is supposed to serve and protect?

The New York Times Health Guide explains a prevailing symptom of Paranoid Personality Disorder as being “highly suspicious of other people.” Those afflicted “often feel that they are in danger, and look for evidence to support their suspicions. People with this disorder have trouble seeing that their distrustfulness is out of proportion to their environment.” Other symptoms include “concern that other people have hidden motives, expectation that they will be exploited by others, inability to work together with others,” “detachment”  and “hostility.”

US legislation exhibiting undue suspiciousness toward allegedly strange “others” suggests how the paranoid style has thoroughly imbued American governance, particularly over the past 10 years. An especially strong onset of symptoms is evidenced in the blizzard of new laws, programs, and executive orders dating from September 11, 2001.

Indeed, the US government’s dramatic increase in suspicion and contempt toward others over the last decade, combined with its accelerated violent and criminal aggression toward innocents at home and abroad, indicates a potential onset of what might even be deemed paranoid schizophrenia. With the development of such a condition the subject as a whole suffers from acute delusions of persecution and is tormented by illusory forces that it perceives as seeking to inflict harm on it.

This advanced stage of illness may have been triggered by the violent terrorist attack of September 11, 2001; one that the subject immediately blamed on a set of previous associates, Osama bin Laden and his mercenary group known as Al Qaeda. Despite the government’s continued insistence that bin Laden and Al Qaeda are the culprits, exhaustive expert forensic and scientific investigations have been unable to confirm their involvement in the crime. Nevertheless, the subject uses the unresolved incident as the primary rationale for its accelerated paranoia.

The following pieces of legislation, programs, and actions–by no means exhaustive–illustrate the unfortunate yet steady advance in the paranoid style of American governance that especially since 2001 has placed both the subject and all who come in to contact with it at risk of serious injury or death.

Gave president power to apprehend and deport resident aliens if their home countries were at war with the United States of America. With no sunset provision, act is intact today as 50 U.S.C. §§ 21–24.

Made it a crime to publish “false, scandalous, and malicious writing” against the government or certain officials. Enacted July 14, 1798, with expiration date of March 3, 1801 (the day before John Adams’ presidential term was to end).

Made it a crime to interfere with the war effort or with military recruitment or to attempt to aid a nation at war with the U.S.

Extended Espionage Act of 1917 to cover a broader range of offenses, notably speech and the expression of opinion that cast the government or the war effort in a negative light or interfered with the sale of government bonds.

Authorized internment of tens of thousands of American citizens of Japanese ancestry and resident aliens from Japan. Also authorized transporting these citizens to assembly centers hastily set up and governed by the militaries of California, Arizona, Washington state, and Oregon. EO 9066 was combined with other war-time orders and restrictions to smaller numbers of residents of the United States who were of Italian or German descent.

General plan by the US military to respond to major domestic civil disturbances within the US by suspending US Constitution and declaring martial law. Developed in response to the civil disorders of the 1960s and now would be carried out by U.S. Northern Command (NORTHCOM).

Created the Federal Emergency Management Agency that is to interface with the Department of Defense for civil defense planning and funding. Bulk of FEMA funding utilized for construction of secret underground facilities to assure continuity of government in case of a major emergency, foreign or domestic.

Appointed National Security Council as principal body to consider emergency powers. Allows government to increase domestic intelligence and surveillance of U.S. citizens and would restrict the freedom of movement within the United States and grant the government the right to isolate large groups of civilians.

Allows US government to use evidence from secret sources in deportation proceedings for aliens suspected of terrorist involvement. Deportee would not have right to face accusers. Makes an individual liable for contributing to an organization deemed by US President to be involved in terrorism, even if donation was for a non-terrorist activity.

US government may confiscate or freeze all foreign and domestic assets of any individual, entity, or organization accused of engaging in, planning, supporting, concealing, or perpetrating any act considered domestic or international terrorism against America.

Created in response to the September 11, 2001 attacks. Cabinet department of the US federal government that is domestic counterpart to US Department of Defense. with primary responsibilities of protecting the United States of America and US Territories from and responding to terrorist attacks, man-made accidents, and natural disasters. In fiscal year 2011 it was allocated a budget of $98.8 billion, spent $66.4 billion, and had 200,000 employees. Stated goal is to prepare for, prevent, and respond to domestic emergencies, particularly terrorism.

DHS establishes Fusion Centers, defined as a “collaborative effort of two or more Federal, State, local, or tribal government agencies that combines resources, expertise, and information with the goal of maximizing the ability of such agencies to detect, prevent, investigate, apprehend, and respond to criminal and terrorist activity.” “Fusion” also refers to data mining of multiple sources of information on citizens who may pose “terrorist threat”. There are presently 58 such centers operating throughout US.

Allows US President to declare a “public emergency,” station troops anywhere in America and take control of state-based National Guard units without the consent of the governor or local authorities, in order to “suppress public disorder.”

Puts domestic terror investigations and interrogations into the hands of the military. Allows for stripping of due process, indefinite detention of anyone, including American citizens, based on US government claim that they are terrorists.

All new online devices provide a treasure trove of data to US intelligence on “persons of interest” or “potential terrorists.” In March 2012 CIA Director David Petraeus discussed emergence of an “Internet of Things” — or, wired devices — at summit for the CIA’s venture capital firm In-Q-Tel. “‘Transformational’ is an overused word, but I do believe it properly applies to these technologies,” Petraeus remarked, “particularly to their effect on clandestine tradecraft.”

“National Defense Resources Preparedness” EO enacted on March 16, 2012 renews and updates the president’s power to take control of all civil energy supplies, including oil and natural gas, control and restrict all civil transportation, which is almost 97 percent dependent upon oil; and even provides the option to re-institute conscription in order to achieve both the military and non-military demands of the country.

The DHS signs off on “indefinite delivery” for nearly 500 million high-power ammunition for .40 caliber firearms from defense contractor ATK. Department says it expects to continue receiving shipments from the manufacturer for the next five years.

Obama and about 100 counter-terrorism officials have created “kill lists” to specify extrajudicial executions of suspected Al Qaeda terrorists in the drone war in Pakistan and Yemen. Obama exercises complete discretion over who may be placed on list. American citizens are not exempt.

NDAA sets stage for US military to potentially arm up to 30,000 drones set to fly over US. More powerful versions of the famed Predator drones, known as MQ-9 Reaper drones, are being fitted with missiles and other explosive ordinances as part of the deployment of the 30,000 drones authorized to fly over the US.

8 thought on “The Paranoid Style of American Governance”