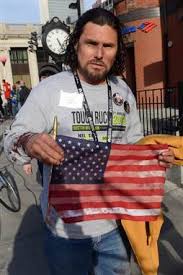 Carlos Arredondo has been widely praised by an array of corporate news media as among the most valorous figures of the Boston Marathon bombing. He was “heralded as a true American hero,” the International Business Times gushes, having allegedly “risked his life to help the victims of the two explosions that rocked the Boston Marathon.”[1]

A resident of Bangor Maine who tragically lost his son in the Iraq War in 2004 and thereafter turned to peace activism, Arredondo and friend John Mixon were at the Boston Marathon to support participants running in honor of Maine’s fallen Iraq War veterans. Following the blast, the two say they crossed Boylston Street and began tearing down the snow fence and scaffolding to get to the bombing victims. “Arredondo vaulted it and tried using his clothes and towels to stanch the victims’ bleeding but they were hurt too badly,” Maine’s Portland Press Herald reports. “Both men helped get one of the spectators, missing both legs, into a wheelchair that race medical staff had brought. ‘I kept talking to him. I kept saying, “Stay with me, stay with me,” Arredondo said.”[2]

Followers of the story will recall that while in the hospital and through a narcotic-induced stupor Bauman uncannily came to and provided a stark recollection of the  Tsarnaev brothers as the bombers. “He woke up under so much drugs [sic], asked for a paper and pen and wrote, ‘bag, saw the guy, looked right at me,’”Bauman’s brother Chris told Bloomberg.com.[3]

In the above photo Arredondo is seen allegedly holding onto an artery as he helps rush Jeff Bauman to an awaiting ambulance. Newspapers report “After jumping the security fence to help on Monday, Arredondo rushed to help the young man whose legs were so badly damaged. He asked the man his name – Jeff Bauman – and then told him, “Stay still. The ambulance is here.”

The Washington Post ran an even more sensationalistic account that wholly excerpted Arredondo’s efforts at moving the fencing and scaffolding:

Carlos Arredondo ran across Boylston Street, jumped the security fence and landed on a sidewalk smeared in blood. In front of him, two women lay motionless. Another woman walked around in black-powder smoke, looking down at the fallen bodies. “Oh, my God,” he said she repeated, dazed. “Oh, my God.” Arredondo had been a Boston Marathon spectator, carrying a camera and a small American flag. He dropped the flag. He took four pictures — focusing on a young man crumpled on the sidewalk. The man had a blank expression, and a leg that was only bone below the knee. Then Arredondo put the camera away. He asked the injured man his name. “Stay still,” he remembered saying, in accented English. “The ambulance is here.”[4]

There’s a major problem with the above scenario. The photos taken that day of the overall scene and Arredondo’s activities therein suggest that he went about his purported heroic exploits in a much more time-consuming–and perhaps somewhat less noble–fashion.

This CCTV video at 2x indicates that at exactly 3:05 Arredondo commences his valorous gallop with Bauman to the waiting ambulance. This is over six minutes after the initial ordnance was detonated.[5]

What exactly was Boston’s “Cowboy Hero” doing in the interim as Mr. Bauman lay suffering on the nearby sidewalk?

Arredondo can be seen here on the left waiting by the fence before donning his hat and springing into action as the wounded lay before him. Bauman appears to be behind the black woman dressed in dark pants, white shirt and red jacket

Rather than rushing to assist the man who allegedly lost both his legs, as we are told he “instinctively” did by the Washington Post, Arredondo now pauses here to attend to the fencing.

The official casualty count of 264 injured cannot be readily demonstrated in these photos, unless perhaps a far greater percentage of casualties could be evidenced where the second bomb detonated further down Boylston Street and away from the finish line.

Here is another shot of Arredondo still far more preoccupied with the fencing and scaffolding than the injured and maimed.

With the fence finally dismantled  Boston’s “Cowboy Hero” now has his back entirely turned away from the fallen.

Arredondo the Boston Cowboy Hero is seen here continuing to wrestle with the scaffolding.

As Arredondo assists with the fencing, a severely maimed Jeff Bauman is left unaided on the ground.

Arredondo the Cowboy Hero now appears to be leaning against the scaffold framework and possibly partaking in another slight breather.

Meanwhile no one is assisting the severely injured Jeff Bauman.

Army Reservists are among those who appear to assist Arredondo the Cowboy Hero in his struggle with the scaffolding, while the injured and maimed continue to be left unattended.

Here the fencing and scaffolding are wholly removed. Yet Arredondo has still not proceeded to assist Mr. Bauman. Further, while the entire area is swarming with uniformed emergency medical personnel, the would-be severely injured and traumatized Bauman is left unattended.

A high resolution version of the photo above shows the precise time on the overhead timers for the marathon (over the road) as 4:12:06. This is 2 minutes and 23 seconds after the blast (timer reading 4:09:43 at time of blast). This is a very long time for the many bombing victims with reportedly lost limbs and devastating shrapnel wounds to be left unattended while potential responders who have been presented as unyielding and chivalrous defenders of the massacred struggle with fencing.

The series of photos suggests how it will be several more minutes before Bauman is taken to the ambulance. Why is it that proper medical personnel in the interim didn’t attend to the grievously wounded man? Perhaps this is nothing a dramatic photo shoot couldn’t take care of.

Boston’s Cowboy Hero Arredondo adjusts his hat as he finally locates and rescues Jeff Bauman, prior to accompanying him in the wheelchair.

The last photo which shows the timers is where they are being removed (why?). The time shown is 4:14:26 which is close to five minutes after the blast. In this photo Arredondo may be seen bending over where the injured lay, yet he is mostly obscured.

And finally a key photograph successfully captured that will strongly imbue the severity of the Boston Marathon bombing into the public mind.

In summary, in spite of there being ample personnel attending to the wounded at the bombing, and despite apparently having both legs blown off, Jeff Bauman was left completely unattended for at least 2 minutes and 20 seconds.

Then, after going so long without attention it is not even medical personnel who attend to him. He is instead in the care of a civilian in a cowboy hat who, after several more minutes, puts him in a wheelchair to wheel him to an ambulance. Why didn’t medical personnel take over at some point in time?

Is Carlos Arredondo really the hero US news media portray him as? Are such news outlets perhaps perpetuating a misconception? Did Arredondo really jump the fence and rush to assist Bauman? Or was this perhaps a contrived scene where Arredondo fulfilled a particular predetermined role? Was the apparently maimed man who would later play a key role in identifying the Tsarnaev brothers as the alleged evil culprits deliberately left unattended for a photo shoot? Why otherwise would Bauman be ignored by everyone including his valiant rescuer for so long?

Moreover, why have the major and even certain alternative media failed to forthrightly examine what appears to be an increasingly curious and implausible event?

[5] Further, the same CCTV video suggests that more than one trip may have been necessary to produce the desired shots, including one involving an awkward interruption midway through after Bauman may have lost a lower appendage. http://www.youtube.com/watch?feature=player_embedded&v=3A8JDqHhUD4#!

173 thoughts on “The Unlikely Antics of Boston’s “Cowboy Hero””